Arrival  Extraordinary!      At Morris's Garden!
BALLOON ASCENSION
Mr. J. WISE
THE CELEBRATED AERONAUT,
Takes this opportunity of informing the Ladies and Gentlemen of this city and vicinity, that he will, at the request of numerous citizen, make his 62nd Grand Atmospheric Voyage, on
Saturday Afternoon on July 31, 1847,
between 3 and 4 o'clock, from Morris's Garden corner of Main and Tupper Streets
The Capacity of this enormous vessel is Sixty-Five Thousand Gallons, and it requires for one inflation of Hydrogen gas, one thousand eight hundred pounds of sulphuric acid; one thousand five hundred pounds of iron, and twelve thousand pounds of water.  The method of generating hydrogen gas by the decomposition of Water, is of itself, an interesting and mysterious process;  Fifty-Five Thousand Gallons of which will be made and introduced into the Balloon under the immediate eye of the spectator.  During the process of inflation, Mr. W. will be pleased to answer any inquires regarding the nature and Philosophy of the same.
ORDER OF ASCENSION
Doors open at 12 o'clock when the inflation commences.
At 1p.m., small balloon will ascend
At 2, a pioneer balloon will be launched
At 2 1/2 a Pilot Balloon will point out the direction of the wind
At 3 1/2 Mr. Wise will hitch his car to the Aerial Vessel, and after floating a few minutes between earth and air, by a single cord, will detach himself from Terra-firma and ascend to the Region of The Clouds!
Seats in the gallery affording a complete view of the whole operation, reserved for Ladies. Reserved seats 50 cents; circle 25 cents. Doors open from 12 p.m. to 6 o'clock p.m.

FIRE WORKS!
Commencing at 8 o'clock precisely
Mr. Wise is expected to return from his ascension and give the audience
an account of his excursion.
A good Band of Music will be in attendance during the afternoon and evening.
Single tickets 25 cents.  One gentleman and two ladies, 50 cents.


John Wise was The 19th century's, most successful and most famous aeronaut. “Coupled with his enthusiasm, generosity, and scientific curiosity, clearly marked him as the most distinguished and experienced of American aeronauts."   In the nineteenth century many ascensions were made just for the novelty of the event, but John Wise's approach was from a scientific perspective. Each ascension gave him a chance to conduct scientific investigations of the atmosphere, pneumatics and hydrostatics.  It also gave him the opportunity to develop a more advanced flying machine. Wise was the first to observe the "great river of air which always blows from west to east" in the higher regions of the atmosphere. Today we call this phenomenon the jet stream.  He also developed the ripcord safety mechanism, and in 1838 developed a balloon that would collapse into a parachute if deflated or ruptured in flight.  It actually saved his life when his balloon ruptured at 13,000 ft. and he survived the descent.
John Wise promoted the advantages of balloon transportation. In 1843 he conceived a project for crossing the Atlantic Ocean and asked Congress to appropriate $15,000 for the project. Congress, however rejected the appropriation.  He is credited with the first U.S. airmail transportation in 1859. Although  the balloon only traveled 30 miles due to unfavorable weather and never made it to NY City from Indiana it was still considered official.
Buffalo Morning Express - Monday August 2, 1847
On Saturday afternoon, pursuant to notice, Mr. Wise made an ascension from this City.  The day was clear and pleasant although a stiff breeze was blowing from the south west, which it was feared by many anxious spectators on the outside of the Garden, would prevent the aerial voyage. However at 1 o'clock,  the inflation commenced and the balloon filled much faster than the Garden, when at 4 o'clock precisely, when the word was given to "let her go" and Mr. Wise and his aerial craft rose quickly and most beautifully into the space above, amid the cheers of the multitude.  The wind carried the balloon to the northward and eastward in a rapid but most graceful manner and her progress was upward and onward until some fifteen minutes after leaving the Garden, she began to decline behind the higher lands at the north, and was out of sight.
The Ascension was made under disadvantage circumstances, but so perfect and so beautiful was it, as to settle in the minds of the people of Buffalo, a large concourse of whom honored the occasion with their presence on the outer side of the Garden----the fact that this aeronaut never fails. After remaining mid-air about 25 minutes, he made the earth again and landed at the pleasant Village of Williamsville.

According to John Wises Log of the Flight, It wasn't that easy (Ed.)

AERIAL LOGBOOK 62nd VOYAGE
July 31, 1847
"4 pm precisely, started with aerial ship "Rough and Ready" under ballast and brisk gale from the S.S.W.  Wind moving at the rate of a mile per minute. Started with considerable ascending power but the current was so strong, that in order to make a more perpendicular rise I was obliged to throw over 30 pounds of ballast, which having lightened the vessel, together with a strong horizontal force, caused it to pitch and girate with a desperate motion.  Also a stiff breeze rushing down upon me from above, so as to partially turn the balloon in the net--Work throwing the valve, which is at the upper central point, one third down the side, placing it in a position that made it very unmanageable in a quick decent...."
His route took him over Grand Island toward Niagara Falls. This was the first ever aerial observation of Niagara Falls, (and Buffalo, for that matter), his reaction being one of disappointment after such high expectations in his mind. ...Upon reflection I concluded that this must be Grand Island, and immediately my attention was drawn to a search for Niagara Falls, as I heard a slightly rushing noise of a waterfall. My eye soon rested upon it, and after scanning it for a few moments I involuntarily cried out "Is that the Falls!? And no wonder, "It had the appearance of a little cascade rippling through the meadow of a gentleman's country seat. I was disappointed, for my mind seemed bent on a soliloquy on Niagara's raging grandeur, but it was a bubble; it looked too small. The scenery of the great panorama surrounding it could only absorb my mind.  The little frothy bubble had too much the appearance of a foaming glass of London brown stout to bring my mind wholly upon it's grandeur, it looks like a little humbug when viewed from the clouds." 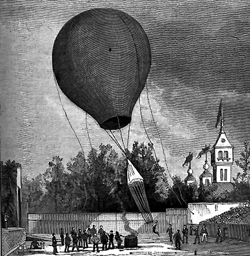 Upon the discovery that Niagara Falls could not interest me from above, I concluded to make my landing at the first village in my track, Williamsville.  When three miles from this place I commenced a rapid descent, which, with the prevailing gale, tossed the vessel to and fro at a fearful rate, and at one time in a fair way of coming in contact with the church steeple of the village, which must inevitably been pulled along, had I been entangled on it, but a quick discharge of ballast enabled me to clear it, upon which I waved my hat, and soon the villagers were all in motion.  Over fences and gardens, lanes and creeks, and in every direction did the Williamsville men run to help me down.
Unfortunately for me, however, the impetuosity of the "Rough and Ready" was such that nothing was fast enough to reach her in time, and in another moment she dashed against a tree, where after chafing and careering for a few moments, she hurled the car through the branches of the tree, and lodged it in the foliage of a tree on the opposite side.  Across the creek dashed my Williamsville friends, and while I grappled a firm hold in the Hickory limbs, several men clambered the tree and secured my car in it's branches.  Here then I commenced a rapid discharged of gas from the valve, as well as from the breaches in the balloon.. In fifteen minutes more we brought her down upon the ground, some what the worse for wear in appearance, but so as to be repairable in a few days for a future flight.  From the time I left the ground until I touched it again, occupied 35 minutes. Time of flight 19 minutes.
Buffalo Daily Courier - Monday  Aug. 2nd  1847
"Mr Wises Balloon ascension on Saturday Afternoon went off beautifully, grandly.  We regretted, however, to see many of our citizens, particularly in carriages, avail themselves of Mr. Wises enterprise, by gratifying their curiosity with an outside view, while within, their were hardly enough to cover expenses".....Mr. Wise was brought back to this city about 8 o'clock in the evening, by H.B. Evans, Esq., of Williamsville... The custom in which he made balloon ascensions was to advertise the ascension and sell tickets to a complete afternoon event so as to cover expenses.  Creating the hydrogen gas to inflate the balloon at the time, was crude and expensive.  Because many Buffalonians chose to take the "cheap seats" at the event(free), John Wise lost $327. This was such an embarrassment to the citizens and newspapers of the city that they invited him back to try another ascension "so he might be indemnified for his loss on the first."  He answered; "From the friendly representations made to me since my last ascension by a large number of citizens of Buffalo, as also from the unsolicited and unexpected friendship of the press generally in this city, I am induced to risk the cost of another ascension, on Friday next.  John Wise, Buffalo, Aug. 3rd 1847

Email ThisBlogThis!Share to TwitterShare to FacebookShare to Pinterest
Labels: Ballooning