141 Years Ago Today Mark Twain at the Buffalo Express

Buffalo Express  August 21 1869
"Salutatory"
Being a stranger it would be modest and unbecoming in me, to suddenly and violently assume the associate editorship of the Buffalo Express without a single explanatory word of comfort or encouragement to the unoffending patrons of the paper, who are about to be exposed to constant attacks of my wisdom and learning. But this explanatory word shall be as brief as possible.  I only wish to assure parties having a friendly interest in the Journal, that I am not going to hurt the paper deliberately and intentionally at any time.  I am not going to introduce any startling reforms, or in any way attempt to make trouble. I am simply going to do my plain, unpretending duty, when I cannot get out of it; I shall work diligently and honestly and faithfully at all times and upon all occasions, when privation and want shall compel me to do it; in writing, I shall always confine myself strictly to the truth, except when it is attended with inconvenience; I shall witheringly rebuke all forms of crime and misconduct, except when committed by the party inhabiting my own vest; I shall not make use of slang or vulgarity under any occasion or any circumstances, and shall never use profanity except in discussing house-rent and taxes.  Indeed, upon second thought, I will not even use it then, for it is unchristian, inelegant and degrading-though to speak truly I do not see how house-rent and taxes are going to be discussed worth a cent without it.  I shall not often meddle in politics, because we have a political editor who is already excellent, and only needs to serve a term in the penitentiary in order to be perfect.  I shall not write any poetry, unless I conceive a spite against the subscribers.
Such is my platform. I do not see any earthly use in it, but custom is law and custom must be obeyed, no matter how much violence it may do to ones feelings.  And this custom which I am slavishly following now, is surely one of the least necessary that ever came into vogue. In private life a man does not go and trumpet his crime before he commits it, but your new editor is such an important personage that he feels called upon to write a "Salutatory" at once, and he puts into it all that he knows, and all that he don't know, and some things he thinks he knows but isn't certain of.  And he parades his list of wonders which he is going to perform; of reforms which he is going to introduce, and public evils which he is going to exterminate; and public blessings which he is going to create; and public nuisances which he is going to abate.
He spreads this all out with oppressive solemnity over a column and a half of large print, and feels that the country is saved.  His satisfaction over it is quite enormous.  He then settles down to his miracles and inflicts profound platitudes and impenetrable wisdom upon a helpless public as long as they can stand it, and then they send him off Consul to some savage island in the Pacific in the vague hope that cannibals will like him well enough to eat him.  And with an inhumanity which is but a fitting climax to his career of persecution, instead of packing his trunk at once he lingers to inflict upon his benefactors a "Valedictory".
If there is anything more uncalled for than a than a "Salutatory" it is one of those tearful, blubbering, long winded "Valedictories"- wherein a man who has been annoying the public for ten years cannot take leave of them without sitting down to cry a column and a half. Still, it is custom to write Valedictories, and custom should be respected.  In my secret heart I admire my predecessor for declining to print a Valedictory, though in public I say and continue to say sternly, it is custom and he ought to have printed one. People never read them any more than they read the "Salutatories", but nevertheless he ought to have honored the old fossil-he ought to have printed a Valedictory. I said as much to him, and he replied:
"I have resigned my place--I have departed this life--I am journalistically dead, ain't I?
"Yes"
"Wouldn't you consider it disgraceful in a corpse to sit up and comment on the funeral?"
I record here, and preserve it from oblivion, as the briefest and best "Valedictory" that has yet come under my notice.----Mark Twain

P.S. --- I am grateful for the kindly way in which the press of the land have taken notice of my irruption into regular journalistic life, telegraphically or editorially, and am happy in this place to express the feeling. 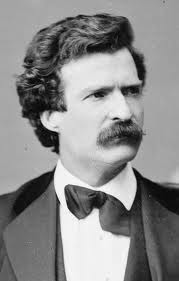 EDITORS NOTE:  Although Mark Twain actually had written an editorial or two before this one in the Express, this was the first one he signed. The others were anonymous. Being the 100 year anniversary of his death I thought it best to include the article in it's entirety, word for word as he wrote it, out of respect for his writing style. In too many places I found it paraphrased and sentences "adjusted" to today's English.  I had to rewrite it completely before publishing.

Editors Note: Jan. 12, 2010 Mark Twain has been in the news a lot lately especially since we think his works need to be re-written to today's standards. Maybe we should take a little "white-out" to his original manuscripts too and burn any of his volumes with the original script. Teaching children a false truth is dangerous. It is better to read the original and then explain why it was written in that manner, what was acceptable then and why, then what is acceptable now and why. Now you have a true learning experience. Stop this censorship, it's a dangerous precedent.


Answer:
"Mark Twain" - The call made by River Boat Pilots when making soundings of the River.

Twain was a visionary.