Buffalo's Hidden treasure are the Holly Steam Pumps at the Col. Francis G. Ward Pumping Station on Porter Ave. Built by the Holly Manufacturing Co., Buffalo N.Y. in 1914, they still exist today in their original configuration complete and intact. The five engines each stand 60 ft. tall and weigh in at 1100 tons apiece and capable of pumping up to 30,000,000 million gallons per day each. They were the largest engines ever built by the Holly Company. They operated, pumping Buffalo's water till about 1980.  The building itself is magnificent with it's large arched windows, tile walls, iron railings and street lights lining the balcony.
The Industrial Heritage Committee, Inc. has sponsored public tours of the Pump House, and these incredible engines.    It was a rare opportunity to see this one of a kind array of steam engines. We talked about the history of Buffalo's water system, explained the steam engines and other interesting stories about the pump house, and answered any questions. 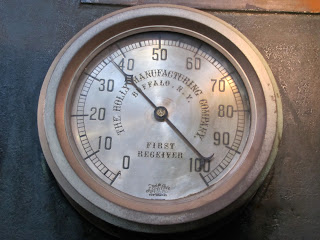 The pumping station's official address is 2 Porter Ave. Buffalo N.Y.  14201, for those  of you using a GPS. It is located at the foot of Porter Avenue, at the corner of D.A.R. Dr.   near the Peace Bridge. From the North take the 190 to exit 9 Porter Avenue, then turn right. From the south take 190 to exit 8 Niagara Street, turn left on Niagara then six blocks to Porter Ave., turn left and continue to Pumping Station. Now turn left onto D.A.R. Drive. Parking while available, will be at the Centennial Park Pool lot, then on the street. Entrance to the Pumping Station will be at the southeast corner of the building. 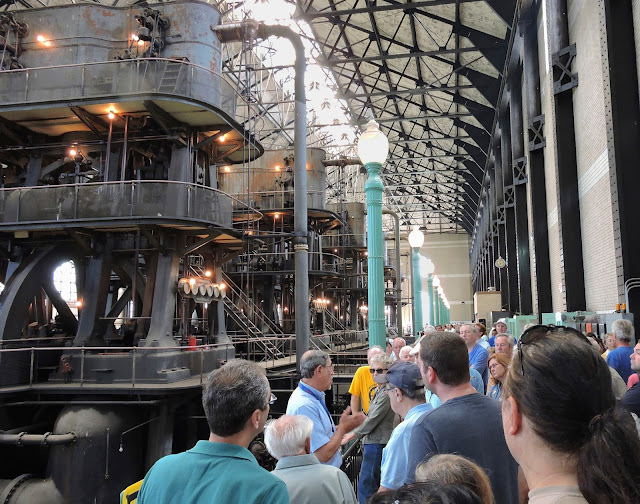 BELOW, BASIC CONCEPT OF THE VERTICAL TRIPLE
EXPANSION STEAM ENGINE

Video below: Kempton Triple Expansion Steam Engine U.K.
Largest in world still under steam. These are similar in type and size
to the pumps at the Col. Ward Station.

From American Heritage of Invention and Technology Magazine Fall 1999
Buffalo’s Big Steam
AS A LIFELONG STEAM-MACHINERY BUFF and engineer, I was delighted to read about the Col. Francis G. Ward Pumping Station, on the Buffalo waterfront. In the early 1960s I visited Buffalo, and it was my luck to learn that early the evening I was there one of the steam engines was going to be put in service. Standing on the balcony next to the enormous machine in the dim light, I was almost hypnotized by those flashing rods and whirling flywheels. Using the built-in cat-walks, we were soon standing on top of the 98-inch-diameter lowpressure steam cylinder nearly 30 feet above the balcony floor. It wasn’t until I was down next to the pump end below the balcony floor, watching those three pump plungers flash up and down as they pushed 947 gallons of water into the Buffalo water system with each revolution, that I really felt the enormous power of the machine.
The Holly Manufacturing Company, which made the engines, was organized in Lockport, New York, in 1859. It moved to Buffalo and joined forces with the Snow Steam Pump Works in 1902, and the resulting Snow-Holly Works continued to make reciprocating steam pumping machinery well into the 1920s.

Buffalo has a treasure in the Col. Ward Pumping Station. It should be designated a National Historic Site and opened to the public.

A very similar steam engine is located in Boston at the Waterworks museum. It has been open since March 2011. The museum also has an even larger Allis steam engine manufactured in Milwaukee. You can learn more about the museum at www.waterworksmuseum.org.

Hello there. I am in charge of the restoration to steam of a similar, but slightly smaller waterworks engine in Phillipsburg NJ. I took over the project with a colleague in 2017 and we inherited the engine in a heavily damaged state, since that time we have been building new parts for it and sourcing a portable boiler for it to run on. We make no profit on the project, the work has been done so far entirely on fundraisers and a small grant. Currently we are about 75% of the way through the project including the auxiliaries and only one more piece of valve gear needs to be remade before the engine is ready for service. Please connect me to the group that manages these engines, I wish to contribute my work and experience with these machines. It is very easy to damage them. When our effort in Phillipsburg is completed, we will have been the first to restore a waterworks engine to working order on steam in the US and ours would be the largest working steam engine in the Western Hemisphere. Colonel Ward station would take this title if an engine was brought to steam there.

Mr. Karnes, great to hear from you, someone who is finishing up a restoration while we are just beginning the journey. Please contact me at jerrym99@gmail.com and I will give you the contact information you want.

In 1958, as the age of 18, I worked as an oiler at the Col Ward Pumping Station. During those hot summer months three out of the five steam pumps were in operation. Oiling those massive machines was a tricky job and scaling the steps to lubricate the third deck was a challenge.

These photos bring back many fond memories og my day6s at the Pumping Station.

JD., we are always looking for former employees who worked on the engines when they were running. Please come to The Industrial Heritage Committees open house tour on June 22, 2019. We have a project in the works to get one or two of the engines running again and would like to here your story. I will be doing the tour narration that day. You can also contact me by e-mail at jerrym99@gmail.com.

Jerry, that is an excellent plan you have, to get at least two of the pumping engines restored to operation again.
I am here having seen the Michael Portillo Railroad journey that he did up your way: the Series is shown here in Australia, not just UK!
BTW,can you prompt the Water Co. to also update their Facebook site for the plant: it still refers to 2017 events?

These work with electric energy, fossil fuels and even, there are models that are activated with solar energy. Among them, there are also some that include different types and powers.