Horsing Around in Buffalo - Long Live The King!

Forty five years ago this summer(1946), all Buffalo was discussing the latest innovation in family carriages with the same zest the exploits of Bob Feller and Ted Williams now receive. For Buffalo was crazy for horses both before and after the turn of the century. Every home of any size had its stable in the rear.
Even today, the old guard in dozens of Western New York stables are making preparations for the fall horse shows, county fairs and harness meets in the old tradition. As they shine their gear in preparation for the big days ahead their talk sometimes turns to the old days when Delaware, Linwood and Richmond Avenues were the show places of the equine world. They remember stables maintained by Seymore H. Knox Sr., the Cary Family, Frank A. Babcock and hundreds of others in all stages of wealth and affluence. Perhaps some speak once in a while of Mambrino King, the "handsomest horse in the world".
The King was owned by Cicero Jabez Hamlin, grandfather of Chauncey J. Hamlin, president of the Buffalo Museum of Science.  On May 1, 1855 Mr. Hamlin founded the Village Farm in East Aurora.
As the years progressed the farm became famed as the worlds greatest trotting nursery, breeding more world's champions than any other single farm in either hemisphere. The Hamlin Stock Farm became famous the world over as the home of Mambrino King, Chimes, Almont, Junior, and of the beautiful recordbreaking Belle Hamlin. Mr. Hamlin dearly loved his horses and never drove a poor one. He did a great deal to improve the quality of stock in Western New York and in the country at large. In 1868, with others, he bought the ground which has ever since been the home of the Buffalo Driving Park.
Mambrino King was the farm's Museum piece. In 1882 Cicero Hamlin bought the 10-year old for $25,000. Two years later, the King had attracted no less than 16,000 visitors who went "all the way to East Aurora" just to see him. Mambrino King was led in and out of his stall 170 times in one weekend so that he could be admired by horse lovers. This apparently was exercise for both the King and his grooms. The horse was a magnificent chestnut, sixteen and a half hands high and pronounced by French officers, who made a visit expressly to see him, "the handsomest horse in the world." In his lifetime, he attracted over 30,000 visitors to East Aurora.
Mambrino King is credited with fifty-seven trotters and twenty pacers with standard records. At the close of 1927 he was credited with 42 sons that had got 226 trotters and 228 pacers with standard records. He had also got 107 daughters that had produced 134 trotters and 90 pacers with standard records.
Finally the King grew old and Mr. Hamlin was forced to dispose of him. He engaged a veterinary to chloroform the gorgeous horse, and had a grave dug in East Aurora. The King still rests beneath the lawn in front of the home at 100 North Willow Street, his spirit still pounding down the stretch at the old Hamlin Driving Park. 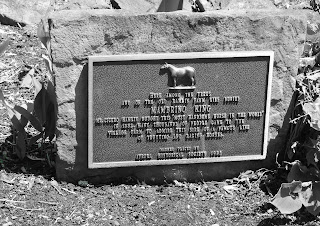 All the racing didn't take part on formal tracks. One old resident recalls that on cold winter afternoons, "stern faced men" invaded Delaware Ave. They drove fast horses hitched to light sleighs and staged races to decide tavern wagers. The races continued until the lamp-lighters appeared, hurrying from gas light to gaslight with their long wands. As the shades were pulled down and the candles and gas mantels were lighted in the homes along the avenue in preparation for the evening meal, the racers disappeared, only to come back the next day.
The more staid citizens owned coaches of many kinds. They took vast pride in their turnouts. Form in appointments and gear was as important as form now is to golf or tennis. The acceptable code for buckles, for example, was square for Victorias, Broughms, George IV Ladies' Phaetons and other town vehicles. The horseshoe shaped buckle was acceptable for road work. Form extended to the drivers, whether groom or owner. Most of the grooms and coachmen were European trained and were men of the world, having traveled as cavalrymen or family retainers over the highways of many countries before coming to Buffalo. 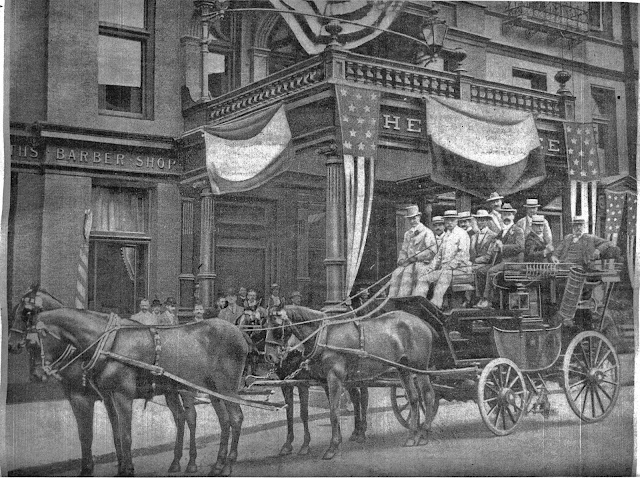 May 26, 1895
The Establishment of a New Boulevard Route Between Buffalo and Niagara Falls
The last Sunday in May will go down in history as the date of the informal opening of a coach route between Buffalo and Niagara Falls. The establishment of such a route is due to the coaching propensities of Mr. Seward Carey, one of the best whips in the country. The coach, which is pictured in todays Express with Mr. Seward Carey on the box, is the well known Brewster coach Vivid, which took first prize at the World's Fair and ran between New York and Philadelphia in the Spring of 1894. It has been re-christened Red Jacket and will be conducted as a public road coach on the Buffalo Niagara Falls route during pleasant weather.

The route will be down Genesee St. to Niagara Square, up Delaware Ave. along the edge of North Park, and over the Buffalo-Tonawanda boulevard to the Lumber City, eight miles away, where the first change of horses will be made. Owing to the unfavorable conditions of the River Road between Gratwick and LaSalle, which is now torn up for the construction of the new electric railway, the route for present will be diverted by way of Johnsburg and Bergholtz villages, rerturning to the River Road at LaSalle, where the second change of horses will be made.
From LaSalle the six mile drive is especially delightful, part of it lying in the Niagara Falls Reservation close by the grandest rapids in the world. The route is 22 miles long, 12 of it over smooth brick and asphalt pavements. It is expected that the 22 miles will be covered with three relays in two hours. It is proposed to leave Buffalo at 10 a.m., reaching Niagara Falls at 12 o'clock. The coach will remain at the falls four hours, and will be due in Buffalo again at 6 p.m.

Other Horse Related Story Links:  Horsing Around In Buffalo
Fire Fighting in the Horse Drawn Era
Posted by Jerry M Malloy at 9:53 PM

This comment originally posted elsewhere by "Sharon" of Vermont.
"Thanks so much for the article regarding horses in Buffalo in he late 1800s, specifically, The Hamlin Stock Farm which became famous the world over as the home of Mambrino King, Chimes, Almont, etc. My great grandfather owned the stallion, King Almont whose sire was Mambrino King and I was trying to research his origins. thanks to your site, I was able to learn more of where he came from."

Everyday my dog and I pass by Mambrino King's grave. It is kept up nicely.