Editor: Where we left him last issue; "We desire much that he should afford the citizens of Buffalo to do him justice, by making good his losses by the former ascension...Several of our prominent citizens have already led off by liberal purchases of tickets.  Let each bear a part, and send up the navigator of space next time, with a heart as light as his vessel."
Buffalo Morning Express Aug 7, 1847
THE BALLOON ASCENSION
There was a large concourse of people gathered on the outside of Morris's garden yesterday, to witness Mr. Wises 63rd ascension, and we are happy to say the number inside was considerably greater than on the former occasion. At a few minutes after 4 o'clock the word was given to "let her go" and he ascended just beautifully to the height of about a mile, the wind carrying him in a southerly direction over the city, thus giving our citizens a fine view of the flight.  Mr Wise has furnished us with the following account, from his logbook, which will be read with interest: 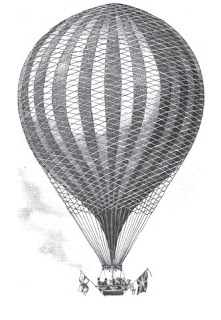 For the Morning Express
From aerial Log of 63d Voyage.
Buffalo City, August 6, 1847
Left Morris's Garden at precisely six minutes past 4'oclock with the aerial ship Rough and Ready under ballast.  Wind, due south, rising slowly--Threw over some ballast--men, women and children scrambling out of the way. Ascent became more rapid.  Rising and traversing parallel with Main St. and a little east of it. As I rose the current bore more for the lake.  4 o'clock 15 minutes, pass the beach and right up the centre of the Lake, began to feel chilly upon the thoughts of a ducking.  One mile out on the Lake, threw out more ballast to reach the great eastward current.  Got up to 4,000 feet and struck a current at the rate of 20 miles per hour up the Lake--This won't do, I shall get out ten or twelve miles before I may get the easterly current, and probably be blown into Canada where I would stand a chance of arrest for contraband.  Open valve and come down within speaking distance.  Making direct for a brig several miles out going to Buffalo.  "Ahoy, What vessel?" "Brig Eureka, Captain Burnell."  "Will you lower a boat Captain, if I come down?" "Certainly", answered Capt. Burnell.  "Then I will be down presently." Came down with all dispatch--the brig laid too, but I got astern of her several miles before her boat was manned and lowered. 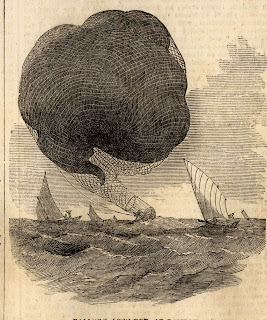 Struck water at 4 o'clock 35 minutes---The balloon first rebounded and glanced over the water in a ricochet manner with wind drawing me up the Lake.  Discharged more gas to sink my car and cause more resistance in order to enable the yawl to overtake me. At 5 min. to 5 o'clock the yawl of the Eureka manned by Jno. Stratten, Jno. Dowd, Jno. McFee, Wm. Padman, and Chas. Angell as jolly a set of boys as ever pulled an oar or spun a yarn, hauled up to me and took me in tow, and in a short time set me safe on board the Brig where I had the pleasure of wagging the hand of Capt. BURNELL, who, upon my thanking him for his kindness, very promptly replied, "It is but a duty to fellow man." If ever it fall within my power to return the favor, I shall never, under any circumstances forgo to carry out the sentiment of Capt. BURNELL.  Thus ended my 63d trip which partook some what of a triple character, being a sort of an Aero-amphibious voyage, and made rather a variety in the progress of the profession.
I am also under obligations to Mr. Coleman and another gentleman whom I cannot name, for their attention and kindness in bringing me on shore from the Brig after she struck in the channel. To the large and respectable audience who honored me with their presence on this occasion, I return my thanks, particularly those who paid for the right; and those who were so numerously on the outside, must excuse me for the sand I dropped on them in the hurry of my departure.
JOHN WISE
Buffalo Daily Courier  August 7, 1847
"Yesterday afternoon, according to previous announcement, Mr. Wise made his sixty-third ascension, from Morris' Garden, corner of Main and Tupper streets. Great interest was evinced throughout the length and breadth of the city, to see it. All sorts, sizes and conditions of people were assembled to witness his flight. We were glad to see a good number on the inside of the Garden. The outside, and indeed the adjacent streets and lanes, were filled with carriages, and a mass of human beings, all anxious to see what they could. After there had been several pioneer balloons sent up, and the curiosity of such as chose to examine the principal one had been satisfied, Mr. Wise prepared himself in the car for his lofty voyage. About four o'clock, after some preliminary trials, he gave the word 'let go,' and amid the cheers and hurrahs of the enthusiastic assemblage, he floated off most grandly. The ease and self-possession which he evinced; the confident air he assumed, showed to our mind conclusively that he was master of his profession. After he was up, he went immediately over the city, in the direction of the lake, thus affording an excellent view of the ascension to the thousands on the housetops, etc."

Return to Part One

Email ThisBlogThis!Share to TwitterShare to FacebookShare to Pinterest
Labels: Ballooning