SUMTER
Written Expressly for the Express
---------------------------
I thought of Sumter all the night;
Of those beleaguered few
Who stood up nobly in the fight
For loyalty and freedom's right,
Against the recreant crew.

I saw five thousand on the shore
Less than one hundred fight!
I heard a cowards cannon roar,
And shot and shell relentless pour
Destruction through the night.

I saw might vanquish right, and then
I heard the miscreants brag
Of "Victory," when those starving men,
Shut up within a fortressed pen,
Were forced to drop their flag.

O, State, which patriots once did claim,
How is it with thee now?
False to thy country and thy name;
Henceforward let the curse of shame
Be branded on thy brow.
M.U.C.

By reference to the telegraphic news, it will be seen that the traitors have at length carried their threats into execution, and have commenced hostilities against the government. Our reports are of course from rebellious sources and may not be reliable. This much, however, is evident. The first blow has been struck by the Secessionists. Their treason has been carried into practical effect. Fort Sumter has been assaulted, and perchance captured, and the gallant band hemmed in there have been cut to pieces by the traitors. We trust, however, that the next intelligence will bring tidings of a more favorable character. We hope to hear that Anderson and his handful of men have been able to hold out and sustain themselves against their assailants until succor could reach them. It now becomes the government to bestir itself, and prepare for the coming storm.  Let it at once make ready to resent this insult to it's dignity and chastise the aggressors with a severity that will vindicate it's power and it's supremacy. There is no middle ground now. War is declared, and it remains for the people to decide whether treason shall prevail or the Government shall triumph.
We may next expect to hear that an assault has been made upon Washington, and perhaps that the Government has been driven from the Capitol of the United States...Of this the President is fully advised, and has availed himself of such means of defense as are at his hand. Nothing but a vast superiority of numbers, however can possibly overcome the government troops and surrender the archives of the nation into the hands of traitors.
But it is no time now for speculation. We have been brought to the sober realities of civil war, and it behooves every citizen to consider well his duty to his Government. Either the federal power or the traitors must triumph in this conflict.  Which shall it be? Shall the flag of treason be covered with victory? Let the people of the Empire State answer for themselves. Let New England speak. Let the Keystone of the Federal Arch put forth her voice. Let the teeming West and Northwest decide whether our Government will be reduced by a band of traitors, and the Union dashed in pieces by these offensive miscreants who have not only defied,  but insulted and assaulted the Federal Government.  There is work for patriotism to perform. There are sacrifices to be made by those who love their country and respect the Union, the Constitution and the laws. 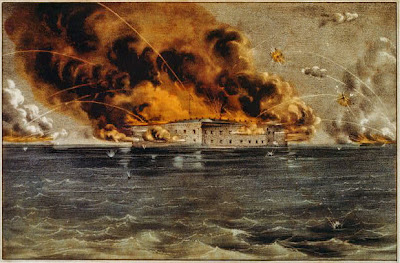 The Government must be sustained at all hazards. The Southern braggarts must be made to bite the dust, no matter at what cost.  They have opened the war--let it be pushed upon them until they sue for peace, under the promise of future submission to the Government.  It were far better that the entire population of the rebellious states should be annihilated than that treason should enjoy a single triumph over the federal power. Let the people of the North arouse and go forth in mass in defense and protection of the government.

Buffalo Morning Express Friday May 3, 1861    Help the Volunteers -- Today at 4 p.m. four companies of volunteers leave Buffalo for Elmira. They are no holiday troops, but go for the war under a two years enlistment. Mostly poor men, they leave in great need of the common necessaries of life. Their officers have exhausted their means in providing for temporary wants, and our citizens should turn in today, each with little supply of necessary clothing and comforts, and see that these men go off in a condition credible to the city whose name they are to bear for good or ill.
Supplies of all kinds, shoes, stockings, clothing, blankets etc., may be sent to either of the following gentlemen at the Court Street Armory:  Co. A-- Capt. Drew; Co. B-- Capt. Layton; Co. B-- Capt. Hayward; Co. D-- Capt. Thomas.  Any help for these should be put forward today, prior to 2 or 3 o'clock p.m. They are hard fisted and courageous men, inured to hardships and are sure to make a fighting regiment that will do our city credit in the field...

Any full volunteer company, inspected by Gen. Scroggs, will be ordered off immediately to Elmira. There is not a doubt about this. Those that seek service can find it in that direction. If the 74th is to stay, let the companies now so well organized and offersered in it be transferred to the Volunteers.
Once more we appeal to our citizens to help the volunteers. They need it. Six additional companies of 77 men each, must be organized before Buffalo has a regiment of it's own.  Turn in men and make a hard, tough, fighting regiment, such as Buffalo should furnish!

Buffalo Morning Express May 1861
A SOLDIERS TEAR
Upon the hill he turned
To take a last fond look,
Of  the valley and the village church,
And the cottage by the brook;
He listened to the sounds,
So familiar to his ear,
And the soldier leant upon his sword
And brushed away a tear.

Beside the cottage porch
A girl was on her knees,
She held aloft a snowy scarf,
Which fluttered in the breeze;
She breathed a prayer for him-
A prayer he could not hear-
But he paused to bless her, as she knelt,
And wiped away a tear.

He turned and left the spot-
Oh, do not deem him weak,
For dauntless was the soldier's heart,
Though tears were on his cheek,
So watch the foremost rank
In dangers dark career-
Be sure the hand most daring there
Has wiped away a tear.
T.H. Bayly

Superb! thanks for sharing this. I love the poem, A Sodiers Tear, as well as the feeling the real emotions of 1861 in Sumter.