ADVENT OF NEW YEAR HAILED BY MANY NOISES

Father Time of 1910 Passed His Last Moments Amid Tooting of Sirens,
Screaming of Whistles and Multitude of Sounds

Great Parties Bade Old Year Farewell
Everybody Was Happy And Annual Jollification Was Most Orderly In Years, 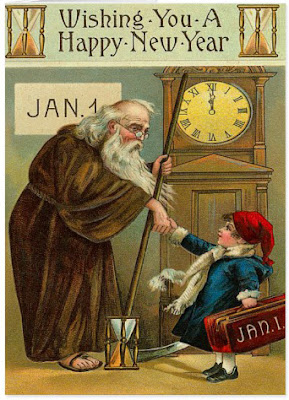 Tottering painfully up the street with one foot dragging heavily after the other as if each step was his last, an old grey haired man made his way up Main Street a few moments before midnight.  His shoulders were bent beneath the cares an wary that were reflected upon his pallid, wrinkled face.  His emaciated form shook and swayed and collapsed in a heap.  A sympathetic crowd gathered around the old man and a cop pushed his way through the crowd to administer his wants.  The lights were dimmed and a transformation took place. There where the old man had lain was a bright little cherub, smiling optimistic.  It was the departure of the old Father Time of 1910 as the chimes rang, whistles blew and horns tooted.  His cycle was completed and in his place came the new baby, MCMXI. His arrival was the signal for an outburst of noise.  The Waterfront shrieked with sirens. Factory watchmen opened the whistles and they bellowed for the grand tidings of a new year. 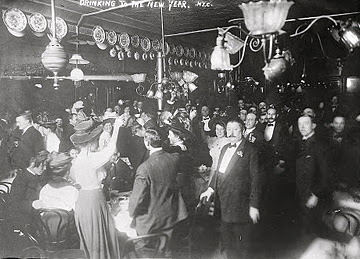 The crowds on the street did their utmost to create pandemonium. Every noise making implement was employed. Horns, clappers, metal spiders and countless other devices were used by the great throng. The streets were alive with people parading up and down the street on their noise-making trip.  They saw the old year out and the new year in, and it was an orderly crowd.  Here and there was a policman who gently tapped the boisterous ones on the shoulder and forced them to be quiet, while others who tried to use ticklers were warned the doors of the lockup would close behind them.  It was the most orderly departure of an old year ever recorded here.
In hotels there were gay parties that took part in the "Farewell to Nineteen-Ten." It was estimated that several thousand saw the old year go away over their dinner plates while they tooted horns or rang bells. Out in the street a detachment of soldiers from the 29th Infantry blew the bugle call during the evening and at midnight taps were sounded on 1910.  Mayor Fuhrmann was enjoying a dish of ice cream at the Iroquois as the year departed. 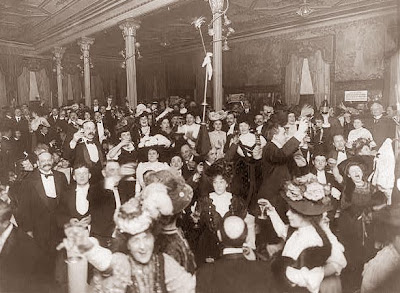 Owing to New Years Day falling on the Sabbath, celebration of the holiday will be extended to tomorrow. Monday in fact will find many social events on the calendar, while cafes and hotels will offer to their guests specially prepared menu's. At all charitable and penal institutions an effort will be made to cheer the inmates with dinner, literary and musical entertainments.  The Salvation Army has made plans for an extensive celebration of the holiday. The success of the Boozers' convention was so pronounced last year that a new campaign was inaugurated at 10:30 o'clock last night at the Army headquarters, No. 13 East Mohawk Street.  At the Saturn Club, University Club, Twenty Century Club and Country Club open houses will prevail. The St. Patrick's Club will celebrate New Years Day as usual with "open house" tomorrow afternoon. There will be vocal and instrumental music during the afternoon. In the evening the annual New Years Dance will be held at St. Patrick's Hall.

Publication  by The Buffalo Express for New Years 1911 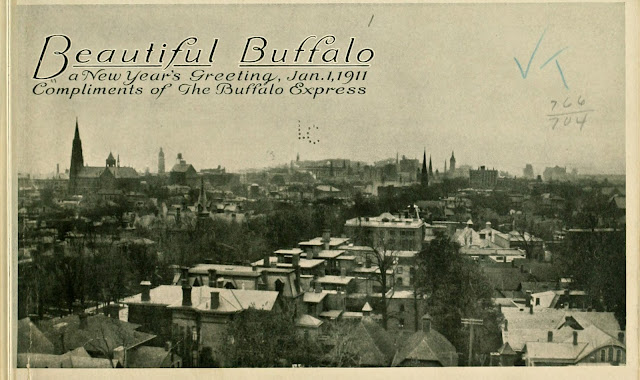 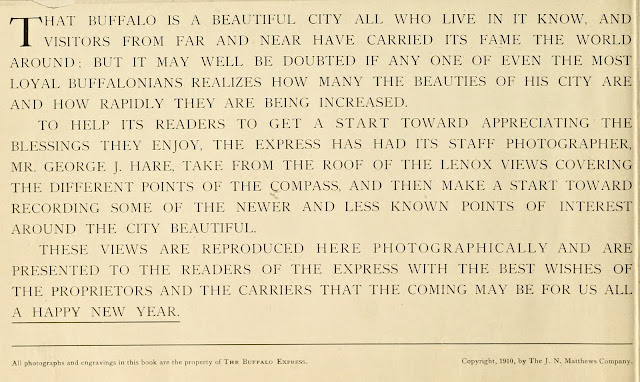 The Buffalo History Gazette wishes all my readers a Happy, Healthy and Safe New Year in 2021! Thank you so much for your readership.
Jerry M. Malloy - Editor

See:  Drying Up the New Year

Beautiful pictues..Came across this while looking for pictures of Humboldt Pkwy before the expressway ruined it.

Thank you. Grew up on a street just off Humboldt Parkway, used to play football on the grass in the center. Watched them cut the trees down one day, what a sick feeling that was.