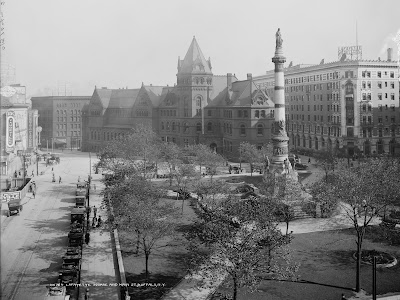 The highest temperature since the Government signal office has had an office here was reached August 4, 1877, and was 94.2 degrees.  On only three other dates do records of the office show a temperature higher than 90--namely June 30th 1878, August 28 1881, and July 3, 1887. The lowest temperature recorded is 13.5 degrees below zero, January 25, 1884. The annual mean temperature since the establishment of the signal office 17 years ago, has been 46.3 degrees.  The average yearly precipitation was 37.92 inches.
The government weather observer says "though the temperature in Buffalo does not reach as high as other lake cities, yet the amount of moisture is considerably greater, as the lake is to the southwest.  The Spring in Buffalo is generally later than at other stations (and no ice boom, Ed.), but the cold waves of early winter are felt much more severely at other lake stations than here." This official and indisputable record shows an unusually equitable and temperate climate. In Summer, especially, the climate of Buffalo is all that a climate should be or could be.

Directory Census  The Buffalo City Directory for 1888 contains 79,557 names, an increase of 1,557 over the preceding year.  The annual average ratio of increase in population for five years past, if maintained till 1900, will give Buffalo a half a million inhabitants.

Streets in Buffalo  Total length, opened and surveyed, 353.27 miles.  Total length paved, 164.22 miles of which over 40 miles are asphalted.  Buffalo has 957 streets, of which only 92 are mentioned in the fashionable "Address Book". 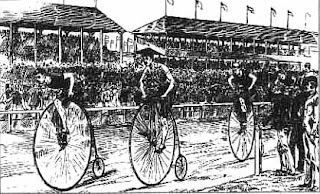 For Wheelmen  Buffalo is a paradise of bicyclers. In no other place can such a combination of good country roads , parkways and asphalt pavements be found.

The Police Force of Buffalo is 345 strong.

No Excuse For Ignorance  Buffalo has 61 public school buildings and 635 teachers, and the system costs about half a million a year.  There are about 40 private colleges, academies, and schools. The first school-house in Buffalo was built at the corner of Pearl and Swan Streets.

Homeopathic Hospital   This is situated at No. 74 Collage Street. It's object is the maintenance of Homeopathic medical, surgical and lying-in hospital. The total number of patients received last year was 300.
Posted by Jerry M Malloy at 2:44 AM

Hi
I am researching a traveller from the UK who arrived in Buffalo at 8.30 a.m. on October 21 1881 on the New York Central & Hudson River Railroad. He had breakfast in the station restaurant - ham, coffee, bread and butter for forty cents.

I really wondered whether you had any more information or photographs of Buffalo Station.

Your help would be sincerely appreciated.

Contact me through my email from my profile page on the right. It will be easier for me to communicate. Thanks