New York Times September 2, 1900
Elizabeth N. J., Sept. 1
A handsome new fire tug which has been built for the Fire Department of the City of Buffalo, was launched at Lewis Nixon's shipyard, at Elizabethport, shortly before 1 o'clock this afternoon.  She will cost $91,000 and is the Finest craft of it's kind afloat.
Like a swan the fire boat W.S. Grattan, sped on it's initial trip from it's cradle at Nixons Ship yard, Elizabethport  NJ.  The fireboat was christened the W.S. Grattan, in honor of the Fire Commissioner. Little Miss Lucia Grattan stood at the bow and smashed a bottle of wine on the nose of the boat as it slid down the ways amid the cheering of 1,000 people, and the blowing of many whistles in the Harbor. The Fire Commissioners were all present on the stand, as was also Chief McConnel. The boat is 118 feet long and is built entirely of steel.  She is able to make over fourteen knots, and will crush ice twenty inches thick.
It will probably take two weeks or more to make the vessel ready for the trip to Buffalo. When prepared for the voyage, the tug will be taken through the St. Lawrence River and the Welland Canal.  It is expected that the trip will take about three weeks.  As the Tug slid down the ways she was christened by Miss Lucia Virginia Malone, daughter of Fire Commissioner of Buffalo. The boat was named the W. S. Grattan, after Commissioner Grattan of Buffalo. The Buffalo Visitors came from New York on the fire tug Vigilant. The commissioners were all accompanied by their families.
The new fire boat is 118 feet long and is built of steel. She has an inch and a half icebelt around her hull. She can throw 18 streams fore and aft, from 350 to 550 feet.  The construction of the vessel was begun in March last.  Among those present at the launching were:  Mayor Diehl of Buffalo, John F. Malone, W.S. Grattan, and William Person, Fire Commissioners of Buffalo, and Chief B.S. McConnell and Master Mechanic David Owen of the same city. -NYTimes-
The Grattan left New Jersey on October 20, 1900 and arrived in Buffalo to great celebration on November 6th docking at Porters Wharf. Many tests and adjustments to equipment happened over the next couple of weeks. After a test run with commissioners on board it was accepted by the Buffalo Fire Dept. on November 15, 1900 and put into service.  David Welch was Captain on board  who brought the Grattan to Buffalo. He also oversaw her construction in NJ, and then went on to pilot the vessel until the early 1920s.   He is buried at Forest Lawn.
This is the same Fire Boat, updated several times over the years, that is now docked on the Buffalo River at the Michigan St. Lift Bridge. Renamed the Edward M. Cotter in the 1950's, it is the oldest operating Fire Boat in the world, and a National Historic Landmark. 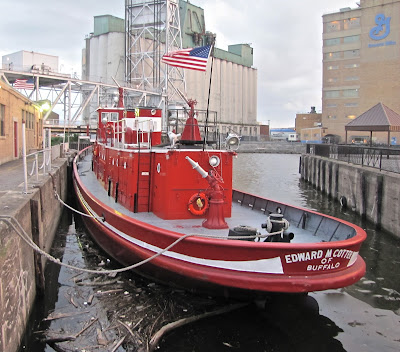 The maiden voyage of the Firetug Grattan from NJ to Buffalo in 1900 was not without it’s trials and tribulations.  These are some excerpts from the ships Log on the Grattan during that trip.  The log relates that the Grattan left Elizabeth NJ on October 20, 1900.
“Thursday Oct. 25— Found leak in exhaust pipe and lost half a day repairing it. 2:15 a.m.  Left pier with pilot: 3 a.m.—pilot left us: 11:10—Beaver Island. Captain, mate and pilot all full when we left Halifax but they were able to handle the craft without mishap.”
The Voyage proceeded smoothly until Monday, October 29th, which the log reported ”comes in overcast.” 6 a.m.—Pilot came aboard. Wind SW very strong. Rain. Difficult to see far. Later lights very plain but pilot has lost confidence in himself. Nearly runs us ashore. Came to anchor of Grosse Isle.”

The next few days passed with only a minimum of difficulty except for the notation, “firemen having trouble with the Sydney coal that we took on at Quebec.”

The Tug reached Montreal at 10 a.m., Thursday November 1st and started to lock through the Lachine Canal two hours later. The log reads “engaged pilot at $30 and fare from Port Dalhousie to Montreal.” The rest of the voyage was uneventful until the Grattan’s arrival in Buffalo.

She tied up at Port Colborne at 8:55 a.m., Sunday, November 4th. On the following day all hands were assigned to cleaning up the fireboat as a prelude to her arrival in Buffalo. One entry noted, “firemen hired as painters at $2 a watch.”

This was the entry regarding her arrival in Buffalo.
“Tuesday, November 6—Six a.m. Commence cleaning again. Leave 9:30 for Buffalo. Arrive 1:30. Greatest reception ever given a boat at Buffalo. Whistling. tie up at Porter”s Wharf.”  The day after it’s arrival the log reads “discharge two firemen and deckhands. Agreed to give $2 a day and 65 cents a day per man of crew, starting with this day, and $1 for Tuesday (presumably the previous day).”

Much work still remained before the Grattan was officially presented for preview.  The following are the concluding entries before the crafts acceptance as a firetug:

“Saturday, November 10—At work on engines, etc. in morning. Test unofficial of pumps about 5 p.m.”  The next day was an off day with the log reading “rest and see Falls. Overcast.” Monday, the Grattan was prepared for the trial.

“Tuesday, November 13— Snow and rain. Very disagreeable. Clean up ship. Report trial trip set for
Thursday. There is no sense in this delay as we are ready now. Preliminary trial successful.”

“Thursday, Nov. 15— New valve bored for initial trip at 2 p.m., as promised. Trial very successful. Boat accepted at special meeting of commissioners on board. All parts of boat satisfactory. No room for complaint in any particular.”

In most instances, the notations from day to day were climaxed with the phrase, “so ends this day”.  So ended the initial voyage of the Grattan which lived up to all advanced notices.

The Grattan has since gone through two rebuilding projects and two name changes. In 1928 it was nearly destroyed in a Buffalo River oil fire but she was rebuilt two years later. Her steam boilers were changed from coal to oil burning and the boat was newly outfitted. New water towers installed near the stern and near the upper pilot house helped make the Grattan "the greatest fire fighting unit on the Great Lakes, "according to fire officials of that time.

In 1952, the Grattan  needed repairs badly, and the city decided to rebuild her a second time, increasing her power and pumping capacity. She was taken  to Sturgeon Bay Wisconsin for the rebuilding job. In that facelifting the firetug was rebuilt except for the hull. Seven new hull plates were installed, along with an armor ice belt. New pumps nearly doubled the pumping capacity from 9,000 GPM to 16,000 GPM. The oil burning steam boilers were replaced by Diesel engines and she was converted from single to twin screw operation.
A new rudder assembly, new steel deck cabins and pilot house, flying bridges and duel engine controls were added. Also installed were Fire Dept. and Coast Guard Radios, an after-tower with hydraulic lift, foam making equipment and other stream lined apparatus. It was then painted fire-engine red. It was then decided this upgraded boat should be renamed and it was re-christened the “Buffalo Firefighter.”

Thanks for your passion! My GGrandfather served on this vessel and my family lived in the Old 1st Ward.

Not sure about the "Port Dalhousie to Montreal" statement - they would have been going the other way to Buffalo...Great stuff - I caught the history bug about the Cotter yesterday after a WBFO piece - what a history!

“engaged pilot at $30 and fare from Port Dalhousie to Montreal.” I believe what that statement meant was that they paid the local pilot $30 for his services in piloting the tug in the Montreal area, PLUS the cost of the PILOTS' trip to get TO Montreal FROM Port Dalhousie where he was at the time.