Dick's Mailer
A Great Labor Saver,
Invaluable to Publishers and Others
Born in 1814 in Bathgate, Scotland, Robert Dick's family immigrated to upper Canada in 1821. He became a Baptist minister, journalist, reformer, and inventor. In connection with preaching and publication of books, Mr. Dick, in 1854, commenced to publish a pamphlet in Toronto, the "Gospel Tribune," an inter-denominational Journal, the monthly editions of which soon increase to 8,000. It was in wrestling with the recalcitrant subscription list that Dick hit on the inventions that made him a fortune. Frustrated by the time required to write addresses on wrappers and to check the currency of subscriptions, he devised ways of speeding both processes. He invented an addressing machine which could fix thousands of prepared labels in an hour and act as a ledger and running record at the same time.
Superintending everything and helping everywhere, necessity made him groan under the burden of seemingly unavoidable blunders, the mental exactions, and the wretched slowness of the mailing work; for these, he exclaimed, "there must be mechanical relief!" As search revealed none, he then said, "it must be created!" and almost instantly he formed the conception of "Web Wheel," "Paste Fountain," "Pasting Belt," and "Label cutting and Stamping Blades." But as there could be no lessening of his editing and publishing taxation's, it took four years of his scraps of time to put his conceptions of his "Typographical Book-keeping and Mailing Machine" into patentable form. Dick moved permanently from Toronto to Buffalo, N.Y., in 1859, probably so that he could establish his patent in the United States. In later years he refined the patents for the “Union Mailer” with its ancillary processes and added patents for locking type in printers’ forms. By 1868 he claimed that over 300 papers and journals in North America used his system under patent; the 12 in Canada included the Toronto Globe and Leader.
Dick died of pneumonia in 1890, survived by his wife and a widowed daughter. His patents passed to his brother and business partner, Alexander, who had moved with him to Buffalo; Alexander himself made improvements to the “Matchless Mailer,” as Robert’s invention was now known, and was a patentee in his own right of the “Fairy Nest Cradle,” a suspended basket for babies which was
rocked by means of a foot treadle.
For Dick's 1887 Seventh Mailer and Best.
Impossible with any other: --With a Dick Mailer one man has addressed three papers in one second, 182 in a minute, 7,334 in one hour, and 45,000 in one day. No Agents, but write to the inventor, Rev. Robert Dick, Buffalo N.Y., unreservedly. With his send off, success is reached at once. 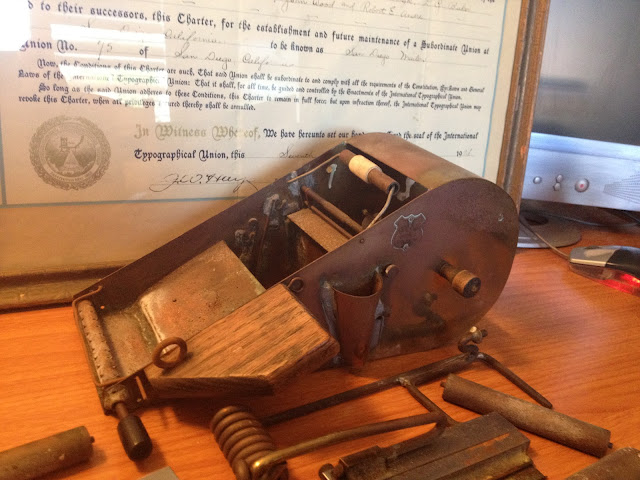