Everyone is familiar the many daredevils who sought glory making attempts to go over Niagara Falls in barrels, as Anne Taylor did in 1901, or walk a high wire across the gorge as Blondin and others did with great success in the 19th century. Now Nik Wallenda made a brave attempt, crossing the Falls on a rope to Canada on June 15(2012).
A little known fact is, that Buffalo, not to be outdone by our Niagara neighbors, had it's own daredevils going over the largest things we had to offer, Grain Elevators! Unfortunately, many of  the daredevils braving Buffalo's waterfront, learned too late; going over Niagara Falls would  have been a lot safer than a grain elevator.
The Watson Elevator was for many years the highest among the large grain storehouses on the Buffalo waterfront. It was a unique elevator situated on an island the same size as the structure itself giving the illusion of the elevator floating on the water.  It was located at the junction of the City Ship Canal and the Buffalo River, just opposite Commercial Slip. The marine leg tower, about 110 ft. high was the point from which daring men, ambitious to win notoriety, essayed to leap or dive into the Buffalo River.
In 1879 or 1880 Charles Comstock made the first attempt to jump from the Watson Elevator. He advertised the event, and on the afternoon designated, thousands of people lined the old Central Wharf and docks to witness the jump. Comstock fastened a plank extending out about 10 ft., and from it he jumped off!  His shoes were weighted with lead, and he descended in an almost vertical line until within about 15 ft. of the water when his body swerved slightly to one side. Hitting the water on left side, he survived suffering only severe bruises and soreness. 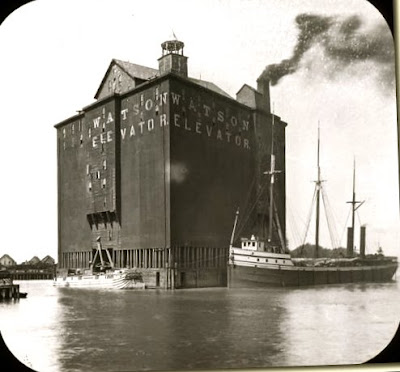 A few weeks later, a young man named Dingman attempted the bolder feat of diving from the top of the Watson Elevator into the creek.  He made the dive but the momentum which his body gathered on the way down carried him head first to the bottom of the river, where he stuck in the mud and broke his neck.
About 1897, Akron Jack, a diver of world wide reputation attempted to dive from the Watson Elevator.  Jack, unfortunately lost control of the dive and hit the water on his side. Thousands had gathered to witness this daring act and saw Akron Jack meet his death.
Two years later another well known diver named Chicago Red attempted to jump from the roof of the elevator into the river.  A well advertised event, several thousand people were on hand to witness the performance.  Chicago Red jumped all right and landed in the river vertically, but the great speed  he gathered took him to the bottom of the river where he stuck solidly in the mud.  His body was found a few days later.

I guess the moral of the story is not to be an 'ole stick in the mud! lol Interesting stuff!

Very interesting, maybe you can do a re-enactment for us?

No Problem, I'll arrange it. Everybody always told me to go "jump in the Lake" anyways, so why not?