Thank You to all the Veterans This Veterans Day

Buffalo gave a dramatic, joyful welcome to her first contingent of returned soldier heroes yesterday when thirty-six members of the 102nd Trench Mortar Battery, the old Troop I, came proudly home after several months in the war zone. They reached Buffalo on February 5, 1919, only a small band, but welcomed by thousands. From the time their train reached the station at 10:30 o'clock yesterday morning until the last dance had been finished at the Knights of Columbus service club last night, Buffalo poured forth its tribute to the lads who have brought glory and honor to the city.
The troops reached the city on a special train over the New York Central, and, when they detrained, a clamorous, insistent throng of relatives, friends and admirers rushed past the station guards, brushed a cordon of police aside and gave them a greeting that must have been in strange contrast to the scenes through which they passed during the great conflict. The men of the 102d battery fell into line for their march of triumph through long lines of eager, welcoming thousands who flanked Main Street for blocks with a solid mass of humanity.  With heads erect, eyes alight with vigor and health and their faces tanned to a ruddy glow the thirty-six men tramped through Main Street to the accompaniment of hand clapping, cheers and the shrieking of hundreds of whistles. Flags fluttered from every point of vantage and automobile sirens joined in the pandemonium of welcome. It was a scene that was strangely reminiscent of the peace day celebration, when cheering thousands poured through the downtown streets and cheered until they could no longer articulate. 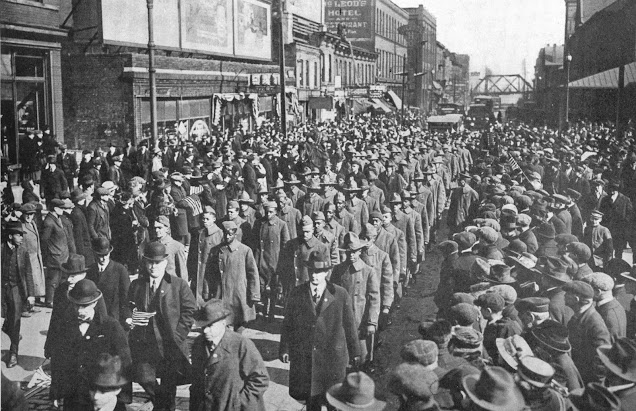 Members of the 92nd Division of African-American troops return home from WWI. Scene is on Exchange Street shortly after leaving the NYC Terminal. For a full detailed account of the organization & fighting campaigns of the famous Ninety-Second  as recorded by the division's official historian, Click Here.
Yesterday's march through Main Street brought out thousands who gave full vent to long pent emotions. Mingled with the cheers and the cheery, 'God bless you,' of the crowd which lined the sidewalks and overflowed onto the pavements could be heard, now and then, the stifled sob of a man or woman as the scene brought to their memory lost ones who will never return. Factory whistles began their shrieking salvos of welcome at 9:55 o'clock, the time the train bearing the men was scheduled to arrive in the city. For more than fifteen minutes they continued their lusty welcome for the heroes.
The soldiers were met at the station by a delegation composed of Colonel Newton E. Turgeon, chairman of the citizens' committee named by Mayor Buck in charge of the reception of homecoming troops, Councilmen Charles M. Heald, Arthur W. Kreinheder and Frederick G. Bagley, City Clerk Daniel J. Sweeney and Chairman Frank A. Darn of the Board of Supervisors. Their escort consisted of a detail of mounted police, a band, and a detachment of the 74th Regiment under command of Captain Ansley W. Sawyer. The line formed on Exchange Street and the route of march was Exchange Street to Main, to Tupper to Pearl.

Exchange Street was a seething mass of human beings, each apparently intent upon being first to greet the soldier lads. As the column reached Main and Exchange streets hundreds of belated welcomers rushed from the lower end of the main thoroughfare and literally surrounded the returned heroes. Their progress through Main Street was repeatedly interrupted by enthusiastic friends who disregarded the Police escort and rushed into the street to grasp their friends by the hand to extend their heartfelt greetings upon their safe arrival home.

A stirring scene was enacted at Pearl and Tupper streets, where relatives and friends of the men gathered in large numbers to greet them with all the cordiality and happiness they have been hoarding for weary months. The motor corps girls drew the curtain on this touching scene when they snatched up the men in waiting automobiles and whisked them away to the 74th Regiment Armory, where they received the official welcome of the city and what's just as important-their first feed in the home town in many months.

With all the due respect we need to show our veterans as in the above story, Memorial Day is set aside for those who did not have the warm feeling of a walk down Main St. to cheering crowds, clapping hands and music.  Their welcome home was more somber and private, if they were able to return home at all.  There were no shaking of hands,  pats on the back or embracing hugs for these men and women.
To them we must pay homage with pictures, memories, prayers and tears. It seems so little for those who gave so much but in this physical world, that is what we have to offer. Our  gratitude for your service and sacrifice for this country and free nations around the world is boundless.   You will always be missed, and you will always be remembered.  Thank You....and to the families of those who we remember on Memorial Day, may you find peace, along with the strength and support you need to carry you through life.  God Bless.