Suburban Trolley Service from Nearby Farms

has been put in Operation.

Three hundred and fifty baskets of freshly picked peaches were brought by trolley from Olcott Beach to Buffalo Wednesday night. The car reached Buffalo at 1 o’clock in the morning, and shortly afterwards the fruit was unloaded at the Elk Street Market.  This marks an important epoch in the history of the fruit and garden truck business of Buffalo. The trolley car systems are certainly destined to revolutionize the hauling of the products of nearby farms into the city.  To the officials of the Buffalo Railway Company is due the credit for successfully working out this plan, which affects every householder in Buffalo, or will in the near future, as soon as the scope of the work is extended.

In the near future there will be an end to hauling of big farm wagons through Delaware Ave., Main Street, Niagara Street, Seneca Street and other main thoroughfares all night long.  The transporting of fruit and garden truck to Buffalo from farms in Erie and contiguous counties has been a serious problem for some time past. Transportation by local trains has been a most unsatisfactory method even where the rates charged have not been prohibitory. The result has been that nearly all fruit and garden truck had to be brought into the city in wagons. It has always been necessary to start these wagons early in the afternoon or evening, depending upon the distance required to be traveled.  During the many hours which the fruit was on the road it necessarily accumulated dirt and dust. the result of this has been that Buffalo housekeepers have not had as fresh and sightly looking fruit and garden truck as they should have. 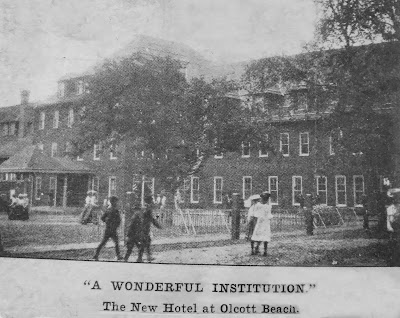 On the other hand the passing of the wagons along the streets at night has long been a nuisance.  Take, for instance, Delaware Ave.  The street is cleaned up early in the evening for the next day, but all night farm wagons pass over the street so that by daylight the next morning the street is littered up.  Officials of the Buffalo Railway Co. took all these things into consideration, and determined to put an end to the trouble by establishing a nightly suburban trolley service for the handling of the products of farms within 40 or 50 miles of Buffalo. Nothing was said about the scheme, and consequently nothing was known of it except by those directly interested in the operation thereof.

At 11 o’clock Wednesday night a special trolley car was loaded at Olcott Beach with 350 baskets of peaches. The car was built especially for this purpose in the shops of the Buffalo Railway Company. It is equipped with a motor and closely resembles a closed trolley car.  It has a capacity of 600 baskets of peaches, and is closed so that all the contents are perfectly protected from the dust of the journey.  The run of about 38 miles to Buffalo was made in two hours over the tracks of the Lockport & Olcott, the Buffalo & Lockport and the Buffalo Railway lines. The entrance into Buffalo was via Main Street, whence the car was taken to Perry Street and over to the commission house of Charles Richardson at 58 and 60 West Market Street. This morning the commission men on the market were extremely jubilant over the successful inauguration  of the suburban trolley car delivery of farm products, and asserted that it would prove of the inestimable benefit not only to themselves but to every householder in the city.

Inquiry at the offices of the Buffalo Railway Company this morning elicited the fact that the system has been permanently adopted. It was stated the another car would be put in service tomorrow; that a number of similar cars are now in the process of construction at the company’s shops, and that by next week several of these cars will be in successful operation.

Officials of the Buffalo Railway Co. promise that they can give a rate for transportation which will enable the farmers and fruit producers throughout Western New York to bring their products to Buffalo in a much better, quicker and more economical manner.  Instead of 12, 15 and 20 hours being consumed in the journey, all the products from the farms can be gathered late in the day, loaded after dark, and reach Buffalo Markets between 1 and 3 in the morning, fresh for the consumers.  Furthermore, this system will be in strange contrast to the transportation of produce by railroad from points not easily reached by wagon. All who have had anything to do with the handling of fruit and garden truck sent by train know the extremely stale and bad condition of most of it by the time it has been handled and re-handled before it reaches its destination.
As the Buffalo Railway Co., or the main organization, International Traction Company, controls all the suburban lines  in and  around Buffalo, the company is prepared to offer great inducements for the transporting to Buffalo of all products of farms many miles from Buffalo in almost any direction.  The officials promise shortly, the cars now being constructed will be completed and will at once be put into daily service.
Posted by Jerry M Malloy at 11:39 AM