Samuel Wilkeson, He Built Buffalo By Building It's Harbor: Part 3

In all Buffalo's history no event was so significant to the future welfare of the city as the building of the first harbor. This task, carried on despite tremendous physical and economic obstacles, was an act of civic zeal unmatched in the later annals of the city.

THE exact date in which the harbor work was begun is not on record, but it was some time before May 20th in 1820.  The rains were heavy that spring when Sam Wilkeson got his cook shack and sleeping quarters built. Day after day, clouds hung in leaden-gray banks over the lake and then moved inland before the wind. The rain came in driving blasts against the village. The earth was sodden. Men sank almost to their knees in mud when they walked in the streets. 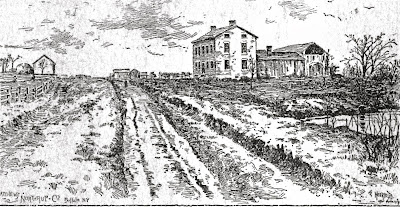 INSIDE the homes of the frontier village, fireplaces were still lit against the dampness. Trees stood dark and forlorn in the rain, black with water, writhing in the wind. Against the lake shore, waves crashed in roaring spray as the wind churned the surface into, whitecaps which gleamed, even in darkness, like bared teeth.

IT was not the kind of weather in which men liked to leave the snugness of their homes. The day after the cook shack and sleeping quarters were built, Wilkeson sent out a call for laborers to assemble at daybreak. Only a few responded. He called the work off. For several more days the project was stalled. Then, with characteristic determination. Wilkeson broke the bottleneck. He made a standing offer of $2 a month more than the regular wage, if the men agreed to work regardless of weather. The result was gratifying and the problem was solved. Thereafter the men worked six days a week, from dawn to sunset, with a half hour break for breakfast and an hour for lunch. There was little absenteeism and only one case of intoxication on the job. Almost without exception, the men who began the project worked through to the end. There were no fights among the workers.
Wilkeson writes: “Two plans had been proposed for the work; One by driving parallel lines of piles and filling up the intermediate space with brush and stone, and the other by a pier of hewn timber, filled with stone. The latter plan was adopted. The timber intended for piles was used in the construction of cribs, three of which were put down the first day.” Since few tools were on hand, the cribs could be put down only when the lake was perfectly smooth. As far as possible, they were fitted on shore. The opposite timbers were made secure with six-foot ties bored and numbered and then floated to their places. There they were assembled. The trunnels, two feet long and made of oak or hickory, were driven home. It took an hour to put the crib together. On the same day it was assembled, it was sunk and secured with stone. 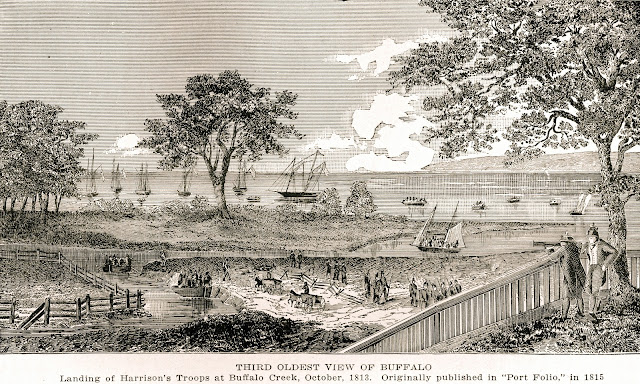 ON the first day of work the lake was calm. Three cribs were built and sunk. The weather remained good the second day and the work proceeded. But late on the second night, the wind rose suddenly. There was no breakwater to protect the shore. The waves chopped their way landward, lashing against the cribs until daybreak. When Wilkeson arrived at the scene in the morning, it was as if ruin stared him in the face. The waves had eaten away at the sand and gravel on which the cribs had been sunk. Almost all the cribs were out of line. In some cases the sides were sunk, in others the ends were deeper. They jutted this way and that, “the whole presenting a most discouraging appearance.” 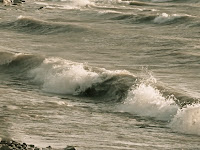 But as he waded into the water to examine the worst damage, He writes: "Fortunately a little brush had been accidentally thrown to the windward side of one of the piers, which became covered with sand, and preserved this pier from the fate of the others." There he found the key to his problem. "Profiting by this discovery every crib subsequently put down was placed on a thick bed of brush, extending several feet to the windward of it."
JUDGE Wilkeson's faithfulness to the underlying principle of the undertaking, economy; is indicated in the following paragraph of the record:  "Neither clerk, nor other assistant, not even a carpenter to layout the work, was employed for the first two months, to aid the superintendent, who, besides directing all the labor, making contracts, receiving materials, etc., labored in the water with the men, as much exposed as themselves, and conformed to the rules prescribed to them of commencing work at daylight and continuing until dark, allowing half an hour for breakfast and an hour for dinner. Besides the labors of the day, he was often detained until late at night, waiting the arrival of boats, to measure their loads of stone, and to see them delivered in the pier, as without this vigilance some of the boatmen would unload their stone into the lake, which was easier than to deposit it in the pier."
THE improvised pile driver was pressed into use. It took 100 strokes of the old Army mortar to drive each pile to the desired depth. As the work progressed out into the lake a platform was built for the blind horse which furnished the motive power for the pile driver. The horse plodded round and round on the wooden planks; a few feet above the surface of the lake. Two months after the work got under way, Wilkeson hired a carpenter at $1 a day to build the timbering of the piers above the lake surface. By autumn the pier extended almost 800 feet into the lake and Wilkeson's crews were sinking cribs at a depth of 7 1/2 feet. As the pier-construction proceeded, and the deeper water was reached, "the cost of the work alarmingly increased." It was decided "to suspend operations for that year." Possibly they hoped to gather additional funds during the winter months. But if the future of the harbor was uncertain, in matters of money and of use, the builders had had the satisfaction of seeing that the cribs could make a harbor. 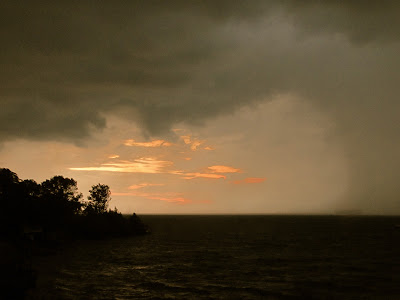 ON SEPT. 7, 1820, the still incomplete project underwent it first test. The timber work was finished but the pier was only partly filled with stone. That afternoon two small vessels came under the lee of the pier and made fast. The captains went ashore to conduct some business. As evening approached, clouds piled in threatening banks in the sky. The wind rose suddenly. A storm was definitely in the making. Fearful that, if the storm came, the two vessels might carry away the part of the pier to which they were fastened. Wilkeson sought out the two captains and asked them to move the ships. But he was too late. While they were talking the gale broke. The wind drove spray like buckshot. The water seethed, waves, broke with a roar against the pier. To move the ships now was impossible, unless they were simply to be cast loose and allowed to run on shore. Despite the fact their vessels could be damaged seriously in the process, the two captains agreed to do-this if it appeared the pier would collapse. 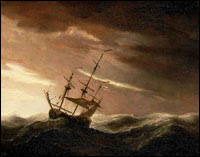 THE ships rose and fell in the pounding waves, crashing against the pier as the water bore down an them, pulling with tremendous weight at their lines as they rolled away. In the blur of wind and water, Wilkeson waited for the storm to pass. Then he saw for the first time how well the challenge of the elements had been met. Neither the pier nor the ships, were damaged. The next day the work of filling the pier with stone was resumed. The pier, which at this time extended 50 rods into the lake, was in a few days filled with stone, and the operations upon it suspended for the season."
NOW another problem had to be met. The pier was only part of the harbor plan. The most difficult part was yet to come. This involved cutting a new straight channel for Buffalo Creek and it also was the most dangerous element in the entire operation. No one knew whether the plan for the new channel would succeed. If it did not, there was no additional money on hand to meet the emergency and the entire harbor project was doomed.
AT that time, Buffalo Creek entered the lake about 1,000 feet north of its present mouth. For some distance it ran almost parallel to the lake shore behind a bank of sand. The new channel was to be cut across this sand-spit, thus making it possible for ships to sail directly from the lake into the creek without navigating the sharp bends.
THE plan was to scrape through the sand, dam the stream, form the beginning of a new channel, and hope that spring floods would scour it to sufficient depth. Tools were gathered and a call went out for volunteers. The villagers responded quickly. Work was begun in November. The volunteers walked out over the sandpit, took their places along the route of the desired channel, and started to dig and scrape. But just a few feet below the surface heavy stone and gravel were encountered. The stone was of such size it was doubtful whether the spring freshets would carry it out to the deep water of the lake. If it was not carried far enough, it would serve only to block the channel at another point.It was late in the year. The wind was sharp and there were hints of early snow. The new problem, could not be solved in time. The scraping of the channel was suspended before water level was reached. It was something that would have to be resumed in the spring.
But while all work had stopped, Wilkeson's worries had not. All during the remainder of the fall and through the winter, Buffalonians watched the pier with anxiety. Its fate was out of their hands and they could only wait. Snow, sleet and hail, the pounding of frigid waters, the razor-edged scraping and tremendous weight of ice, the winter winds which howled across the lake with unremitting fury--if the work should be destroyed by gales, or by ice, "the fund remaining would be insufficient to repair the damage. These were the challenges the pier now had to meet. By spring Buffalo would know the answer.

Thanks for such a great read. I can not wait for part 4