"Greater Buffalo" A City Beautiful From Lake to the Falls

By HERBERT A. PIERCE by special wire from Courier Staff Correspondent.
Buffalo Courier February 11, 1906
Albany, Feb. 1.-- Picture a city with 500,000 inhabitants with a chain of parks and parkways more than 35 miles in length, traced through with a smooth macadam boulevard ending at the world's grandest bit of scenery, Niagara Falls; add to this sketch a municipal power plant capable of supplying light for millions of electric lamps and forcing cars over leagues and leagues of track and there you have portrayed a part of the proposed Greater Buffalo.
No, this is no city of dreams, to be swept away by waking reality of the milkman's rattling wagon, but a city that has been mapped out in assemblyman Quinn's Greater Buffalo Bill, which is now before the legislature for consideration.This week the measure will come before the assembly Internal Affairs Committee for a hearing. The understanding that it will be reported out and sent back to the assembly for second and final readings, thus being launched on it's way to become law.

SWEEPING CHANGES
But what a change is outlined for Buffalo in this measure! It means the annexation of all territory upon Lake Erie and the Niagara River, which lies between and including Niagara Falls and Buffalo, also a creation of a new county composed in part of Niagara and Erie Counties which shall be known as the County of Buffalo.
A great quantity of improvements are are suggested by assemblyman Quinn in connection with this new municipality. Among these is reconstruction of the sewer system, which will make Buffalo's system surpass all others in the country. It is planned to have a sewer 10 or 12 feet wide run from Buffalo proper to Niagara Falls. It is believed this great trunk sewer would keep Niagara River water pure. Moreover, this new sewer, it is expected, will not only pay for itself, and practically all the proposed improvements, but will be a source of revenue to the city as long as it lasts. This revenue will be produced by the power gained from the sewage where it empties into the rapids.
It is believed that more power will be gained from it  than the canal systems which join the Mohawk River at Cohoes. The power derived at this point supplies many plants, and lights several cities, besides giving impetus to thousands of cars.  Power from Buffalo's sewer may be sold to manufacturers and other power companies at a vast profit to the city, beside supplying all municipal needs.
USE FOR GRAND ISLAND 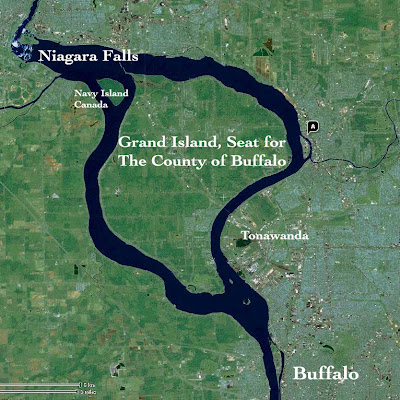 Another part of the general plan for the "new city" is placing of the county institutions on Grand Island. This would include the penitentiary and the almshouse. The spot is a secluded one, and would afford one of the most effective retreats that could be imagined. In this way all the county institutions would be placed at one point and practically isolated, a thing that the city has been seeking to do for years.
The bridges, of which there are two proposed, to be constructed across Grand Island to the mainland, would be owned by the city. This is another item of expense of which the sewer would pay. The proposed park systems and boulevards would, without doubt, equal in natural beauty, those of Vienna and Berlin, as there objective point would be the Falls. At present there is no boulevard running directly between Buffalo and the Falls, and while "roading it" between theses points is obliged to put up with all sorts of discomforts on in-diffferent thoroughfares. The main boulevard is given by initial outline, as 40 feet wide, and equal to any roadway of its kind in the country..
GREAT WATERFRONT 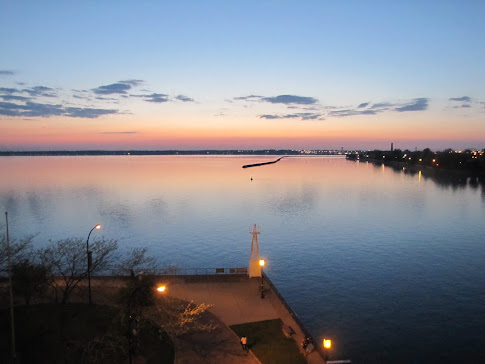 By provisions of this bill Buffalo will have a waterfront nearly as long as that of Chicago. The different systems of dockage and ship accommodation which will be brought into play, are too intricate to be vaguely outlined as yet...,however Buffalo will be the fifth city in point of practical waterfront in the country. In assemblyman Quinn's Bill, it is stated that within thirty days after the passage of the measure, the mayor of Buffalo will appoint two persons, and the Mayor of Tonawanda shall appoint one person, as shall the Mayors of N. Tonawanda and Niagara Falls, respectively to act as a commission in creating the new city and county, each to be known as Buffalo. This will practically wipe the old Erie County off the map, although a part of the county, left untouched, will be joined with a part of Niagara County and named Erie.
Posted by Jerry M Malloy at 4:09 AM