The Buffalo-Grand Island War of 1819

All but forgotten today is Buffalo's own "Civil War." It was a time 202 years ago that squatters living on Grand Island set themselves up as a sovereign nation, elected their own governor, issued their own currency and stoutly resisted all efforts to bring them into the Union.
The State of New York, by a treaty held with the Seneca Indians at Buffalo, September 12, 1815, purchased Grand and several other small islands in the Niagara River. Immediately after it's purchase by the State, numerous squatters flocked onto Grand Island, and built cabins along it's shores on both sides--on the west or Canadian side mostly--for the purpose of cutting, and working into staves, the valuable white-oak timber which abounded there, for the Montreal and the Quebec markets. From those cities the staves were shipped, mainly, to the British West Indies. The staves were taken from Grand Island in scow-boats to Chippewa, then wagoned around the Falls to Lewiston, and there put on board sail vessels for Montreal and Quebec.
At the time the State of New York purchased Grand Island, the territorial titles of the lake and river islands between the united States and Canada were undetermined, and so they remained until the year 1822, when all the islands in the Niagara River, excepting Navy Island, were declared by the boundary commissioners, appointed by the governments of the United States and Great Britain, to belong to the United States, and consequently came under the jurisdiction of the State of New York. Up to the year 1819,  the squatters held undisputed possession of the land, amenable to neither New York or Canadian law; setting up a government of there own, wherein they settled their own disputes, if they had any, but defying the authority of either jurisdiction on the opposite shores.
On one occasion a sheriff constable, armed with a civil process, crossed to the island to arrest one of the squatters, but the rebels put the officer back in his boat, took away his oars and set him adrift in the Niagara River. He might have been carried over the falls, and floated for some distance, until someone, touched by his distress, put out in another boat and took him over to the American shore.
In April of 1819, New York State decided it was time to clear out this nest of rebels. That month the legislature passed an act requiring them to leave the island. In case they resisted, the governor was empowered to remove them by force. In the fall, Sheriff James Cronk, of this county(then Niagara County), ordered them to leave. Some obeyed, but over many of the cabins smoke curled as saucily as before. 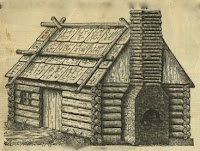 That was the last straw for the exasperated officials. A detachment of militia was called out under Lt. Benjamin Hodge of Buffalo. On December 9, 1819, Lt. Hodge, Lt. Stephen Osborne of Clarence and 30 soldiers, took boats from the "Seeley Tavern," about three miles below Black Rock, on the river shore and crossed, arriving at dusk. Early the next morning the detachment marched to the west side of the Island where most of the squatters lived. Lt. Hodge broke his contingent into three bodies; the vanguard to read a New York State proclamation and help clear the houses where the families were ready to leave, the main force to remove bodily all persons and property remaining, and the rear guard to burn the buildings. 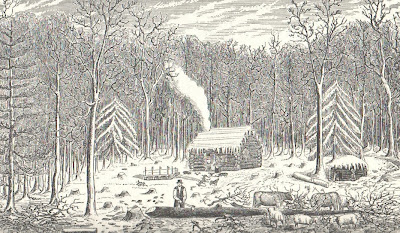 Boats were ready to carry the squatters either to Canada or the United States. All went to Canada with the exception of "Governor" Pendleton Clark. On December 12, the militia party with Sheriff Cronk, found an old Irishman named Denison, who, with the aid of two sons and some helpers, was busy building houses. He claimed the right to remain and told the Sheriff he had discovered the secret of perpetual motion in which he would give the Sheriff a half interest if he were permitted to remain. The sheriff told him to put his "perpetual motion" to use and leave the island at once.
Two more days were devoted to the removal of families. In all, some 150 men woman and children were transported to Canada. The last house visited, and the only one on the Eastern shore, was that of "Governor" Clark. He had already placed his effects in a scow preparing for removal. He went to the American side and not long after bought a tract of land at a point where the Erie Canal was expected to enter Tonawanda Creek. Here in time, a village was built, to which he gave his own first name--Pendleton--and where he was long a respected citizen. 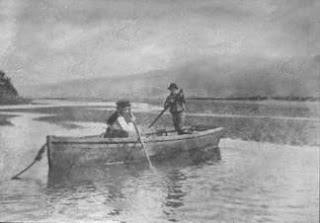 A portion of these squatters, however, immediately returned; but as they ceased cutting timber, and held themselves amenable to the law, they were not again molested by State authority. They rebuilt their cabins, cultivated their little patches of clearing, and remained peaceable citizens, taking a little timber "on the sly," only; keeping a few cattle and pigs, and eking out a poor, but to them, quite satisfactory subsistence. Among them was "perpetual motion" Denison who for fifteen years clung to his secret and insisted on the value of his "motion" with amusing pertinacity.