Buffalo NY 1942 - some excerpts from an undetermined local paper
When the Last of the Seneca Indians Left
Buffalo 100 years Ago - 1842
Buffalo was actually founded by the Seneca Indians in 1780.  They welcomed the white settlers who later forced them to sell their land rights in 1842 and move out of the city they founded, onto reservations they occupy today.... 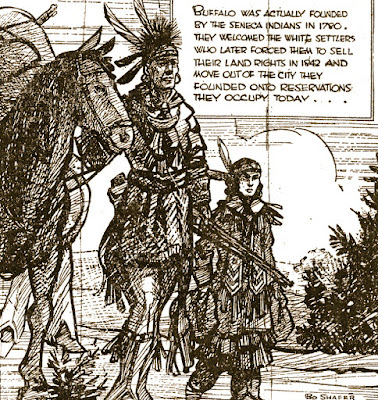 One of the most difficult problems the founders of Buffalo had to solve, was getting the Seneca Indians to give up their land along Buffalo Creek. The first permanent settlement on the site of modern Buffalo was actually made by the Seneca Indians in 1780. On Buffalo Creek some three or four miles from it's mouth, the first Seneca villages were established during the Revolutionary War, after Sullivan's raid destroyed their old homes in the Genesee Valley. The proud and formidable nation fled, panic stricken, from their 'pleasant valley', abandoned their villages and sought British protection under the guns of Fort Niagara.
Col. Guy Johnson fed the Indians from the British commissary at Fort Niagara during the winter of 1779-80.  British officers from Fort Niagara encouraged some 1,500 of them to settle on Buffalo Creek to plant these places, to lessen the burden and expenses at the Fort.  In this neighborhood was built a council house, at which councils and treaties of national importance were held. Associated with it are the names Young King, Farmers Brother, Red Jacket and other Native American celebrities. In this vicinity is the well known site of the Seneca Mission Church built in 1826 and abandoned in 1843. Indian Church Road runs through the old church yard and near the site of the building. 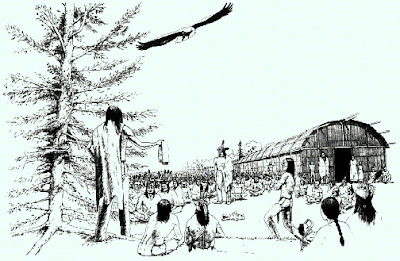 The date of the beginning of settlement "was probably May or early June" of 1780. There had been no permanent abiding place there until that time. Soon after their arrival the squaws began to clear the land and prepare it for corn, while the men built some log-huts then went hunting. The Senecas at Buffalo Creek were under the leadership of Siangarochti, or Sayengareghta, and influential Chief, sometimes called Old King. His family alone raised seventy-five bushels of corn during that first summer at Buffalo Creek.

After the Revolution, the Seneca title to the land along Buffalo Creek was recognized by the government, and the Seneca Village occupied some of the choicest land in Buffalo. As the white settlers continued to come into Buffalo, the Indians became a greater problem. When Buffalo began to expand with the opening of the Erie Canal in 1825, the Seneca Indians became a first class "headache" for the Village Fathers. Those remnants of the once mighty Iroquois had not taken too well to the white man's way of living...but the Senecas legally owned the land, and they would not sell or move.

In 1838, a combination known as the Ogden Company began negotiations with the Indians in Western New York, and in January of that year, a council of chiefs was held in Buffalo.  How the Ogden Company got the various chiefs to sign away their land rights is a dark and shameful chapter in Buffalo History. Scandalous methods of bribery and intoxication where used, and many of the signers were not  recognized chiefs of the Senecas. The Ogden Company offered fabulous sums of money (which were never paid) and 1,820,000 acres of land in Kansas. The people of Buffalo were incensed over the way their Red neighbors were treated, and because of their opposition, the Ogden Company did not attempt to force it's questionable claims to the Indian lands.
A committee of arbiters from Buffalo finally brought the dealings with the Senecas to a successful conclusion, and in May, 1842, the Senecas agreed to give up their land on Buffalo Creek and move to reservations set up for them at Cattaraugus and Allegany. The Buffalo arbiters saw to it that the Indians were paid a fair price for the land they gave up at Buffalo Creek, but the Senecas at Tonawanda flatly refused to deal with the Ogden Company or the arbiters. The government finally bought the entire claim of the Ogden Company and dealt with the Tonawanda Indians seperately.
True to their agreement with the people of Buffalo, the Senecas began to move out of Buffalo in 1842, and soon there were few of them left along the Creek. The land they once owned on Buffalo Creek has since become the heart of the industrial and shipping enterprises in Buffalo.