He Made the World's "Most Famous Hat"
Local Genius Invented Many War Devices,
But None So Thankfully Received by
Doughboys as the Famous "Tin Kelly."

Buffalo Times April 4, 1926
It seems that there can't be much romance in hat making, ordinarily, and not if it's an ordinary kind of hat. John Leopold Brodie, No. 806 West Ferry Street, found romance in his creation however, romance and adventure in quantities to satisfy almost anyone. It was Mr. Brodie who invented the Tin Hat of war-time fame. To Mr. Brodie thousands, perhaps hundreds of thousands allied soldiers owe their lives. Many of the doughboys with a streak of curiosity to peek over the top of a besieged trench, were saved from an army blanket and last post honors by the tin hat.
Mr. Brodies' hat was first chosen by the British Government, and later by the United States Government, as the most efficient life saving hat of more than 40 models offered them. Tests proved that the hat was so constructed that it was practically bullet proof, and the cushioning cage inside, resisted the shock. Under service conditions it was found that the hat cut down on head wounds by 60 percent. 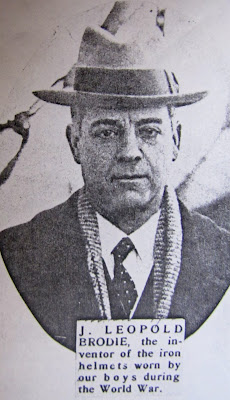 Mr. Brodie has many inventions to his credit. One was a chain steel visor attached under the tin hats and so arranged as to pull it down in front of the eyed for protection from shrapnel. Another war time invention was a message carrying rocket which could be set for a certain distance as the case might be, and save sending a man a man out under fire to a sure death. Also a face protector for tank operators, other were service smoke helmets and gas alarms, most of which saw a great deal of  active service in France.  He is also said to have developed the "stop and go" traffic light.
He was born July 10th in Riga Russia and had an adventurous career. As a young man, Mr. Brodie  went to South Africa and was subsequently interested, as an owner, in the development of diamond and gold mines there, and eventually made a fortune in gold and diamonds at the Kimberly and Johannesburg treasure mines. For several of his years there he was closely associated with Cecil Rhodes. He returned to England and invented a chemical process for the manufacture of salt and engaged in that business until 1914. He is said to have refused a Knighthood in England and to have come to Buffalo just after the armistice to live, solely because his wife (Eleanora Thompson), wished to live in the city of her birth. Mr. Brodie for a number of years has been one of Buffalo's most distinguished citizens, richest of all local war millionaires and possibly the wealthiest man in the city. He received his U.S. citizenship in 1924.

Although reticent about discussing the invention of the most famous hat in the world, he says he conceived of such a hat after statistics showed that about 750 out of a thousand wounded soldiers were suffering from head wounds.  One of the tests that Mr. Brodie put his hat through in order for the government to accept it from among 40 or 50 others,  was to put it on his head and allow it to be struck with a heavy steel bar.  He had so much confidence in  his invention that he was even willing to have the government inspectors shoot at the hat with a 45 caliber revolver while he was wearing it.  This was not considered necessary, however.
Mr. Brodie is asking a royalty for the use of his invention from the United States Government. So far he has received nothing but the heartfelt thanks from the thousands of American soldiers.  They didn't know who to thank for the hat when they were in the trenches, and they probably never will know, but they say thanks just the same.
During the first year of World War I, none of the combatants offered steel helmets to their troops. The soldiers of most nations went into battle wearing simple cloth caps that offered virtually no protection from modern weapons. German troops wore the traditional leather Pickelhaube, also of little protective value. 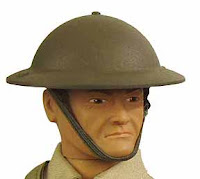 The Brodie helmet (also called the shrapnel helmet or Tommy helmet, and in the United States known as a doughboy helmet) was a steel helmet designed and patented in 1915 by John L. Brodie. The War Office Invention Department was asked to evaluate the French Adrian design but they decided that it was not strong enough and was too complex to allow quick mass production. The design submitted by John L. Brodie offered advantages over the French design as it could be pressed from a single thick sheet of steel, giving it added strength. The British Army first utilised the helmet in September of 1915 but it was not until the spring of 1916 that the helmet began to be issued to British troops in large numbers. It was first used in battle in April 1916 at St Eloi. Troops from other countries in the British Empire also used the Brodie helmet as did the United States when they entered the war in 1917. The United States Government initially purchased some 400,000 helmets from Britain.

Editors Note:  For the record, newspapers in general do not always get every fact correct regarding subject matter (not a big surprise). There were  some conflicting minor biographical information in articles written at different times I found about John Brodie. If ever any reader has additional information regarding John Brodie, that may differ from what I have, feel free to bring it up to me, and I will take it into consideration. Thanks

I have my grandfather's helmet from World War I this was my mother's father as I looked up some information on the helmet mostly to find out what the Insignia men on the front painted on I found out that this helmet was called the Brodie helmet which is my last name curiously enough I also have a brother named John how as you know it was John Leopold Brodie who invented this helmet so my mother's father was wearing a helmet in World War 1 invented by a man would be of the same name the man my mother would marry all of this before they were even born some people don't believe in coincidences I always have anyway it's all very interesting to me also I found out that the painting markings on the front of the helmet tell which County city and state that individual is from so that I could get the body sent back put a proper place. Thank you Mark Brodie