The Playboy of Buffalo!


Story Written by David Kaplan for The Industrial Heritage Newsletter 1993
The Playboy story began in Buffalo after WWII when Lou Horwitz, who had been in the automobile business since 1935, opened a used car lot on the corner of Deleware and Hertel. Horowitz sent cars to Norm Richardson Collision Shop at 988 Ellicott St. for repair. While at Richardson's shop Horowitz learned that Richardson and Charlie Thomas were working on a three wheel car.  Thomas had built a car in the 1930's with the help of Richardson. Lou Horwitz had long believed there was a need for a second or companion car in the American automobile field. Therefore, he joined forces with Thomas and Richardson to form the Playboy Motorcar Corporation with Horwitz as president, Thomas as vice president and Richardson as treasurer.
Lou Horwitz put up $50,000 to build the prototype Playboy. Thomas designed the car and the three men built it in secret over seven months at Richardson shop. On February 18, 1947, the playboy was displayed at the Buffalo Hotel Statler. The Prototype Playboy was a soft-top convertible with a special twelve-head Continental twenty-horsepower engine mounted in the rear.  The car featured four wheel independent suspension and an automatic transmission.
Demand Ran High
During the Playboy's week long display at the Statler, the car generated a great deal of publicity.  The three principals of the Playboy Motor Car Corporation decided to build the cars while demand was high.  They also abandoned the prototype rear engine model because of anticipated engineering, procurement and servicing difficulties.
In May 1947, the company started production of the pilot model of the Playboy with an all steel convertible top and a Continental engine mounted in front. Using Richardson idea of making the car as easy to produce as possible, the company purchased chassis parts from various manufacturers, while they built the body and trim at the Ellicott Street shop. They used a Borg Warner  three-speed transmission with overdrive, and a shortened rear axle from a Studebaker.  They purchased Continental and Hercules engines because both engines fit the cars with little modification. The original Continental engines were only forty horsepower.  Further testing and development indicated that this engine was inadequate with the overdrive transmission, so Continental bored out the cylinders to produce a forty-eight horsepower engine. 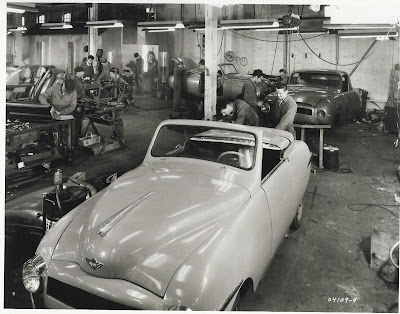 The premier showing of the pilot Playboy was held on August 20, 1947 at the Congress Hotel in Chicago.  Prospective dealers and distributers were recruited after inspecting the car with a four man crew that included Lou Horwitz. Playboy anticipated distributing it's cars primarily through dealer franchises and distributers. Franchises--promising little more than the right to handle the cars--were sold to prospective dealers at the cost of $1,000 per every twenty thousand people in the sales area.  The company marketed between eight and nine hundred franchises.
Ambitious Goals ~ In November 1947, the company's bid $2,259,000 for the former Chevrolet Plant #1 on Kenmore Ave. was accepted by the War Assets Administration of the federal government.  On January 10th, 1948, the Playboy Motor Car Corporation held the grand opening of the new plant.  Lou Horwitz stated, "with the opening of the large up to date plant in Tonawanda, pilot production will be moved to the new site...Currently production is at two cars per week, and we have completed fourteen cars to date...The company will be tooling up the Tonawanda plant for the mass production of the cars at a rate of one hundred thousand a year." 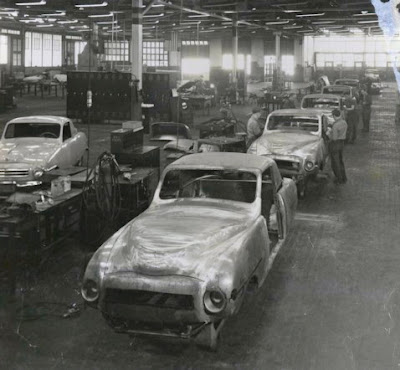 In the February 1948 issue of Mechanics Illustrated, Tom McCahill reported favorably on the Playboy.  On April 17, 1948, The Buffalo Evening News reported that the Playboy set a record for driving from New York to Los Angeles: sixty two hours and twenty minutes. Driver Robert McKenzie reported that he faced the worst weather and road conditions in twenty-five years of auto testing and speed driving, nonetheless he set the record with the Playboy by averaging fifty miles per hour. In a survey of five thousand engineers taken by Automotive Engineer, the Playboy was voted best car in the bantam size.
In order to produce one hundred thousand cars in 1948, the company needed to raise $20 million.  Lou Horwitz decided to sell 20 million shares of stock to raise $17 million.  The sale of dealer franchises was expected to raise the remainder $3 million. On May 20, 1948, Playboy issued a stock prospectus of 20 million shares of stock at $1 per share. Walter Tellier of Walter Tellier Co. was chosen as underwriter for the sale.  Under the underwriting agreement, the company would receive no funds until they received firm commitments for $8,500,000. 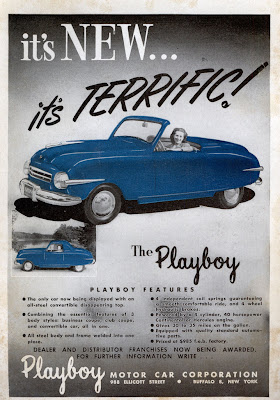 Tellier staged showings in New York, Boston, Philadelphia, Buffalo and Detroit. They surrounded the cars with salesmen, prospectuses and order blanks. They drove across the country giving prospective buyers a chance to test-drive the car.  By June Tellier had passed the $8.5 million mark and was confident in selling out the entire offering.  On August 23, 1948, Tellier had announced they had orders for ten million shares and started to solicit payment.
The Tucker Investigation
But during the Playboy stock offering, an apparently unrelated event, changed the course of the Playboy Motor Corporation. The Securities and Exchange Commission investigated another independent automobile manufacturer, The Tucker Corporation. The SEC alleged that Tucker was attempting to sell stock with no intention of manufacturing automobiles. Tucker was eventually acquitted, but in the meantime the SEC investigation caused the public to be suspicious of Playboy's stock offering. Only $2.5 million was raised.  Lou Horwitz announced that Playboy would start production on a more modest scale instead of waiting to acquire the financing necessary to meet earlier production goals. The company withdrew it's stock offering and revised it's plans to include interim tool and dies and temporarily reduced production program. 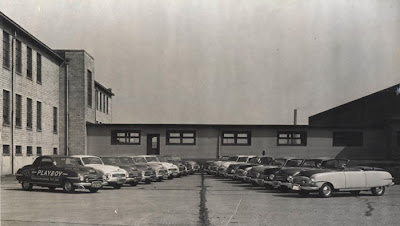 By october 1948, Playboy had completed it's pilot production program. The last pilot model Playboy had a serial number of 000094 with a Continental engine. They also built a station wagon with a Hercules engine and a ninety-six inch wheel base. The body of the station wagon combined wood and steel; the frame was welded to the chassis.
In March 1949 Playboy had another stock offering through Aetna Securities for $3.5 million. By then, engineering to set up production at the plant was substantially completed. The production dies had been manufactured in Detroit, and Playboy had 723 dealers and twenty-seven distributers who had raised over $2 million for the company. Nonetheless, the Tucker Company's stock fiasco continued to haunt Playboy. The Publics response to Playboys new stock offering was nothing. 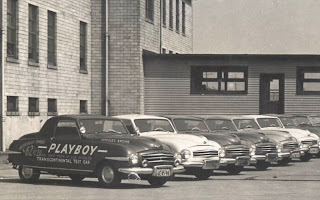 Horwitz' Appeal
On april 14, 1949 the Playboy Car Corporation filed a petition for reorganization under the federal bankruptcy act. They announce withdrawal of the current stock offering.  In June, Horwitz wrote an appeal for contributions to continue production of the Playboy. Remembering the SEC charges against Tucker, Horwitz noted that the Playboy was "Completely engineered and ready for production. Mass production dies are completed." However, believing that reorganizing was futile because the Playboy was not  in production, Horwitz wrote, "My only hope of carrying on is...by a general appeal for the funds for those who have confidence in the future of America and free enterprise. At no time has any undertaking involved more sincerity and sheer determination.  With this thought in mind, I feel this appeal cannot an will not be in vain. Won't you help me make this product possible?" 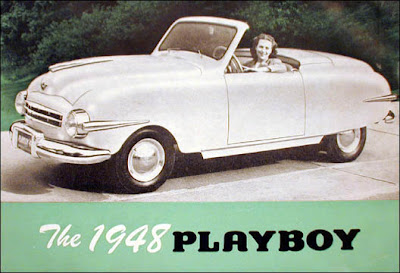 Lou Horwitz plea was denied.  At 10:30 a.m. on Wednesday, February 15, 1950 his dream was auctioned off.  the Playboy Motor Car Corporation had built ninety-seven cars, including two station wagons, and one production car. At the auction, the company's assets were sold to Lytemobile Corporation who tried unsuccessfully to produce the car.

In 1976, the Playboy started it's long journey back to Buffalo. Milton and Tootie Kaplan, Lou Horwitz's daughter, brought the eighty-third Playboy back home. In 1989, David Kaplan brought the soft-top prototype and a production car that was not fully completed back to Buffalo. Subsequent trips brought Playboy #'s 7, 41, 68, 92 and 94 home.  Currently(1993), the prototype is undergoing a restoration which should be completed shortly.
David Kaplan, Lou Horwitz's grandson, adds:  "The prototype's restoration is my tribute to my grandfather.  For as long as I live, his dream of the Playboy will never die". 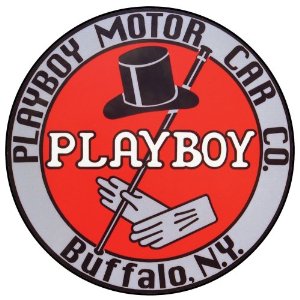 Editors Note:  The Playboy Motor Car Company, was the source for the name of "Playboy Magazine". The name was suggested to Hugh Hefner by his close friend, co-founder and eventual executive vice-president Eldon Sellers, whose mother had worked as a secretary for the automobile company's Chicago sales office before it went bankrupt.  If you would like to see many more of the Playboy cars, many in need of restoration, and many restored, go to: playboymotorcars.com ~   He probably has pictures of all known Playboys around the country.  If you know of any, or maybe you would like to restore a piece of Buffalo History, visit that site.
Posted by Jerry M Malloy at 12:56 AM

Can you please let me know what eventually happened to the beautiful manufacturing plant pictured in many of Ed Howard's photos? I have been obsessed with cars since I was 11 years old (I am now 48), and had never heard of the Playboy until I received yesterday's Hemmings Auto News email blast, concerning the former Massacheusetts dealer selling off some of his collection. Since that time, just yesterday, I've been consumed with knowing more about this wonderful car. As an amateur industrial historian (and being trained as a mechanical engineer), I enjoy studying America's manufacturing history through its factory plants, and now I NEED TO KNOW what became of that former Chevrolet Plant #1, where the Playboy was made. Is it still standing? Is manufacturing still going on in the plant? Or has it been converted to luxury living lofts like all the great plants in Manhattan, Jersey Ctiy, and Hoboken? I would be forever grateful if you could tell me what happened to the plant, as it looks like a great piece of America's manufacturing heritage. Thank you and God Bless You for helping to preserve America's manufacturing history! Sincerely yours, Glenn Krasner Bronx, New York
Email Address: seanglenn47@yahoo.com

Thanks for posting the great video! According to the video, the manufacturing plant on Kenmore Avenue in Tonawanda is now an American Axle plant, which supplies axles to GM cars. This would make sense, as it was originally a Chevy plant. At least its still manufacturing parts for cars here in NYS, and hasn't been outsourced to Mexico or China! Thanks for the great video! For me, this story is just beginning! Sincerely yours, Glenn