Grain Elevators - As They Were (Part Three)

BUFFALO'S VAST CANONS OF COMMERCE
A SCENE IN THE GREATEST GRAIN ELEVATOR DISTRICT ON EARTH -
HOW THE GRAIN IS HANDLED - THE WORK OF THE SCOOPER DESCRIBED -
STUNNING FIGURES OF BUFFALO'S STORAGE AND TRANS-SHIPMENT CAPACITY
Buffalo Morning Express May 14, 1899 (continued)


To comprehend the increase in the size of elevators, compare Joseph Darts with it's 55,000 bushels, and the Great Northern with it's 3,000,000 bushels. The Great Northern is 120 feet wide and about 400 feet long, and so covers more than an acre.  The sides are 102 feet high.  From the center of the building rises a cupola 40 feet wide.  The distance from the ground to the bottom of this cupola is 116 feet and to the top of the cupola 164 feet. In this Great Northern Elevator Elevator could be stored the corn or oats from more than 100,000 acres of land, or the wheat from more than 200,000 acres.  In the early days of steam it was believed that 800 bushels of grain was all that could be lifted and correctly measured in one day.  At this rate it would take ten years to fill the Great Northern. Fortunately for the Great Northern the rate is much faster now. Using it's three marine legs the Great Northern can handle about 30,000 bushels an hour under actual working conditions. In the Great Northern Elevator, as in other modern elevators, only one leg is stationary. The other two can be moved to suit the hatchways, so shall all three can be set at work together on the same vessel.
(Editor) 'What the reporter fails to make note of, is the elevator's use of electricity instead of the usual steam power, which is really what took it to a new level as far as modern grain elevators were concerned. The Great Northern and the Electric were the first two electrically powered grain elevators in the world.'
During the last two weeks the public has heard a great deal about the scoopers. These scoopers refused to go to work for the general contractor for grain handling, declaring in substance that they did not want to work for a middleman for various reasons, but wished to be employed directly by the Lake Carriers Association and the Western Elevating Company. Their refusal to work tied up work on the grain vessels, the river filled with boats waiting to be unloaded, and the discharge of cargoes was very slow. There are those who do not know what the work of the scoopers is and a description will be of interest.
The perfecting of elevator machinery has not been able to do away with the labor of grain shoveling. The elevator leg moves freely up and down and descends into the hold as fast as the level of grain sinks. It cannot be moved sidewise, however, it must remain in the same position in the hatchway, and hence there is a need for shoveling the grain from underneath the decks, to where the leg can reach it. Mechanical ingenuity have perfected steam shovels worked by ropes in the elevator, which pass down the center of the hold, carrying the grain along to the elevator leg. But the grain on the sides cannot be reached by the shovels, so men have to be stationed in the hold to shovel or scoop the grain in front of the steam shovels, and to trim the boat by evening up it's diminishing cargo.
These men who thus scoop the grain out to where the machine shovels can get it, are the "Scoopers". The Rev. Mr. Albertson, a Buffalo pastor, said about them the other day: "These men are enclosed in almost air-tight compartments and they labor hard in a cloud of dust amid intense heat and I am not surprised at the claim they make that no man can stand it many years. The fact is that on land there is no other occupation that more closely resembles the conditions surrounding the stokers on a man-o-war."
Buffalo has become an elevator city because it is at the end of lake navigation. The grain coming down by boat from the western shipping points, had to be unloaded here and put on to railroad cars and canalboats. Elevators were the natural product of these conditions. They accomplish mechanically and cheaply the work of transfer.  Most of the big elevators have water on one front and railroad tracks on another, and so form a direct connecting link between water transportation and land transportation. Not all are so provided however; there is the big Watson Elevator, for instance, with it's capacity of 600,000 bushels, without rail connection. Years ago the canal did most of the carrying; but as the railroad rates fell, the railroads got an increasing share of the business. And last year out of 222,000,000 bushels of grain exported, the railroads carried about 180,000,000.
The report of the Buffalo Merchants Exchange for 1898 shows a total of 40 elevators, six transfer towers, and 8 floating elevators (which are really floating towers, since they have no storage capacity). The capacity of the 40 elevators was put at 20,960,000 bushels with one of the transfer towers credited with a capacity of 40,000 bushels. There are facilities for receiving from lake vessels and railroads and transporting to canalboats and cars daily, 5,500,000 bushels from the 54 elevators, transfers and floaters.
Buffalo stands first in the world in the application and use of marine elevating machinery. No port can rival it in the quantity of grain elevated from vessels, or in the capacity to handle this vessel grain.  Against our dozens of marine elevators, no city up the lakes has more than two or three. Here is Buffalo's pre-eminence; it is the greatest port in the world for the transfer of grain from boat to shore.

Editors Note: Buffalo, in short, was the largest grain transfer port in the world and later the largest flour milling center in the world for many decades. In the last part of the 19th century Buffalo was the 4th largest port in the world in terms of tonnage! Not bad for a City whose lake is frozen over 2-3 months out of the year.  The greatest grain flow in the world was down the Great Lakes from Minnesota to Buffalo and then transferring to seaboard for export.  Buffalo's Grain Elevators have literally fed the world! We were very proud of them back then, and we should be equally proud of the roll they played now, from a historical sense, and should take full advantage of that incredible part of our history in planning waterfront attractions today. A number of the elevators along our waterfront are still operating, and milling operations are still going strong at General Mills and the ADM (Pillsbury) plant on Ganson Street. In fact the old Conagra (Lake & Rail) Elevator on Childs Street has reopened for grain storage in the last couple of years. 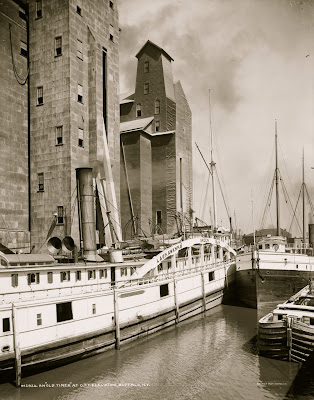 Like it or not, this is Buffalo's Heritage, It's History, It's Legacy to the world! We can not let waterfront planning go on without commemorating and showing off this legacy. Some time in the last few months(spring 2012) a marker on the new Commercial Slip Bridge celebrating Joseph Dart and the first Grain Elevator in the world, was removed and replaced with something else! Excuse Me! Joseph Dart(grain elevator) and Samuel Wilkeson, who built our first harbor, should not only have markers celebrating their achievements, there should be statues in their honor! The Dart Elevator should be rebuilt somewhere in Canalside and showcased with a 19th century sail vessel unloading cargo docked next to it, where people could go in and relive that early technology and the life of  the 1840's dockworker. That is the kind of attractions worthy of re-developement. So much money being thrown around in Canalside and so much ignorance of the true significance of that area.

Dart Street, So Who Was Joseph Dart?

Great site. Keep up the work to keep this history alive

I like your commentary. Sad there is so much fighting on how things should be done. People who KNOW the history and its significance should be the ones with the final say. Thanks for posting this series or articles Mr. Malloy

BTW - did you know Jim Evans? He was a scooper for his whole working life, as was his father. Worked at the Lake & Rail (Conagra). Lived next door to the Harbor Inn in its heyday. His dad is one of the scoopers featured on one of the info signs at Peg's Park.

Good article. As long as we're talking statues there should be one in Buffalo of Willis Carrier who perfected Air Conditioning while working for the Buffalo Forge Co. Talk about history making - Air conditioning changed the world. Willis Carrier was born in Angola where there is a small roadside sign. The only other thing in Buffalo is his gravestone in Forest Lawn.
We really should proudly remember these great pioneers.
Rick Robinson
Chapter Historian
ASHRAE Niagara Frontier Chapter