THE "AUTOMATIC MAN" OF TONAWANDA!

American ingenuity is ever striving for startling effects. It is never satisfied. Ordinary achievements seem beneath its attention. It looks beyond, even if the object of its aim be more or less fantastic. One of the latest freaks of mechanical skill is the contsruction, by Louis Philip Perew, of Tonawanda, NewYork - a small town near Niagra Falls - of a gigantic man. Parew, with all the ardour of a modern Frankenstein, has endeavoured to make his man as life like in appearance as possible. Not only is its outward form a close model of a human being, but within it have been secreted mechanical devices which endow the automation with weird properties, making it even more nearly resemble an intelligent being....The Frankenstein of Tonawanda has brought into existance a thing of wood, rubber, and metals, which walks, talks, runs, jumps, rolls its eyes - imitating to a nicety almost every action of the original on which it is founded... By W.B. Northrop - extract from article published in Strand Magazine of London, England. 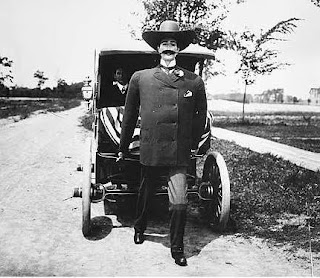 Much credit is due J.A. Deschinger, who is assistant superintendent of construction, for the excellent workmanship of the automaton. He has labored night and day with the inventor to make the giant a success and it was due to the tenacity of Deschinger and Charles A. Thomas, vice president of the Company,that such obstacles have been overcome in it's construction as would have discouraged most other men long ago.

The Strand article is originally titled "The Electric Man". The article as published on Boilerplate has been skewed to fit in with Guinan's fictitious Boilerplate. The picture of Perew is also a fake. See the full story here http://cyberneticzoo.com/?p=732 .