PEOPLE COUNT - Making Sense Out of the Census

American inventor, born February 29, 1860 in Buffalo, New York, and graduated  from Columbia in 1879. Through a friend he got a position at the Census Bureau as a statistician to help solve problems analyzing the enormous amounts data generated by the 1880 census. He joined MIT in 1881 where he taught Mechaniclal Engineering and devised a system of encoding data on cards through a series of punched holes. He left MIT in 1883 and worked at the U.S. Patent office  as an assistant patent examiner. He resigned a year later and received a patent for his machine in 1884.
Following the 1880 census, the Census Bureau was collecting more data than it could tabulate. As a result, the agency held a competition in 1888 to find a more efficient method to process and tabulate data. Contestants were asked to process 1880 census data from four areas in St Louis, MO. Whoever captured and processed the data fastest would win a contract for the 1890 census.
Three contestants accepted the Census Bureau's challenge. The first two contestants captured the data in 144.5 hours and 100.5 hours. The third contestant, a former Census Bureau employee named Herman Hollerith, completed the data capture process in 72.5 hours.
Next, the contestants had to prove that their designs could prepare data for tabulation (i.e., by age category, race, gender, etc.). Two contestants required 44.5 hours and 55.5 hours. Hollerith astounded Census Bureau officials by completing the task in just 5.5 hours!
Herman Hollerith's impressive results earned him the contract to process and tabulate 1890 census data. This system proved useful in statistical work and was important in the development of the digital computer. Hollerith's machine, "read" the cards by passing them through electrical contacts. Closed circuits, which indicated hole positions, could then be selected and counted. 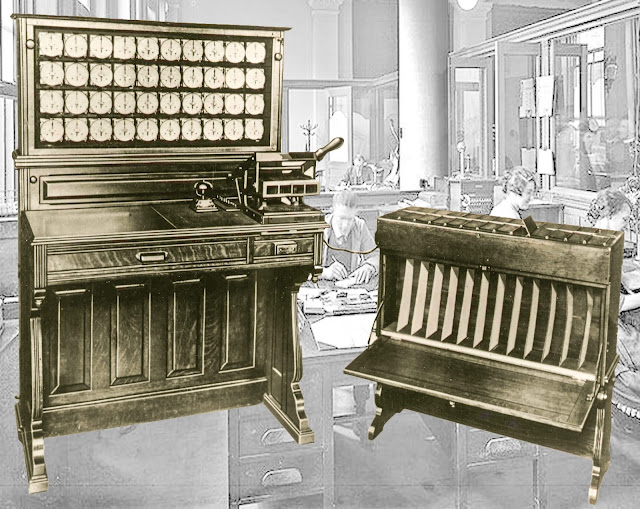 Each Hollerith tabulator was equipped with a card reading station. Clerks opened the reader and positioned a punched card between the plates. The 1890 Hollerith tabulators consisted of 40 data-recording dials. Each dial represented a different data item collected during the census. A sorting table was positioned next to each tabulator. After registering the punch card data on the dials, the sorter specified which drawer the operator should place the card. The clerk opened the reader, placed the punch card in the designated sorter drawer, reset the dials, and positioned a new card to repeat the process. An experienced tabulator clerk could process 80 punch cards per minute.

The Hollerith system was clearly a great leap forward. It took years of hard, patient work to complete the invention. He joined the Census Office in 1879, but didn't file his first patent until 1884. He first put his machines to work in 1887 in Baltimore—just about the time the Census Office was limping through the final stages of manually tabulating the 1880 census. At that rate, the 1890 census would be out of date by the time it was completed. 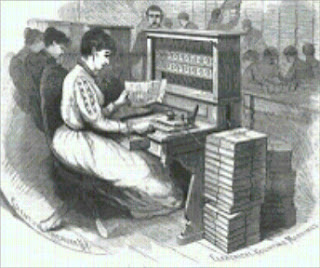 The population was growing about 25 percent a decade, to more than 60 million in 1890. And more information was needed on each of those 60 million people.  It really proved itself in the real census of 1890. Complete results were available two years sooner than the previous census. The data was more thoroughly analyzed, too, and at less cost—an estimated $5 million less than manual tabulation, nearly ten times greater than the predicted saving and a smaller amount of manpower than would have been necessary otherwise. The system was again used for the 1891 census in Canada, Norway and Austria and later for the 1911 UK census.
In 1896, Hollerith formed the Tabulating Machine Company, opening a shop in the Georgetown neighborhood of Washington, DC. This international company leased and sold tabulation machines to census bureaus and insurance companies.  He provided machines for the 1900 census count, but had greatly raised his leasing prices. Hollerith, secure in his monopoly over the technology, knew that the Census Office would have to pay whatever he demanded. It did, but when the office became the permanent Census Bureau in 1902, it began to explore other options.   Barely skirting patent restrictions, Census Bureau employees were able to create their own tabulating machine, more advanced than Hollerith's, in time for the 1910 census. Census Bureau technician James Powers was able to secure the patent for this machine, and he started his own machine tabulation company in 1911. 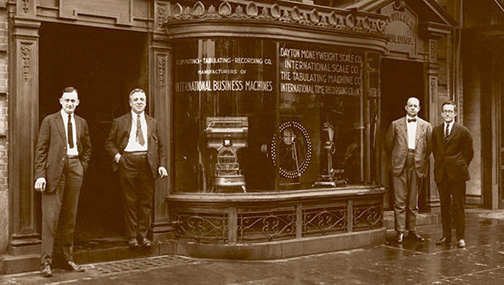 Hollerith's company continued to grow as it adapted its machines to do more jobs. For example, in 1906, Hollerith added a plugboard control panel so that new machines would not have to be rebuilt to do new tasks. Business continued to grow, and so did the company. In 1911, Herman Hollerith merged Tabulation Machine Company with three other companies to create Computing Tabulating Recording Company. In 1924, the company was re-named International Business Machines Corporation, better known as IBM today. Modified versions of his technology would continue to be used at the Census Bureau until replaced by computers in the 1950s.
Although Hollerith worked with the company he founded as a consulting engineer until his retirement in 1921, he became less and less involved in day-to-day operations. Hollerith retired to his farm in rural Maryland, where he spent the rest of his life raising Guernsey cattle.  He died of a heart attack in November 1929 in Washington D.C. and buried in Oak Hill Cemetery in Georgetown.