GIVE ME A BRAKE!!

The first series of tests of the new Westinghouse air-brake for freight cars was made on the main line of the Erie near Alden,  November 4, 1887, which was witnessed by over 100 railroad men and other gentlemen of Buffalo.  The test was made with a train of fifty freight cars of the Pennsylvania, standard style, thirty eight feet and 4 inches long, and weighing about 30,000 pounds each.  The entire train was 1,900 feet long with an enormous weight of 2,000,000 pounds.
In 1869, George Westinghouse patented his first air brake. Prior to this development, mechanical brakes were used which had to be individually applied to each car by brakemen.  The problem with the first straight air brake, it applied braking pressure to the front cars sooner than the rear.  By 1873, he developed the triple valve, the key component in the creation of an "automatic" air brake. Instead of using compressed air directly from the locomotive,  his system placed a reservoir of air under each car and charged them from a continuous brake pipe linked to the locomotive.  That way if the air pump failed or the train parted, air stored on each car could apply the brakes automatically-- an especially useful fail-safe feature.
Although the plain automatic air brake

was a great improvement over the straight air brake, in an emergency the system still applied the brakes to the last cars in a train later than to the first cars in a train. To remedy that condition, George Westinghouse invented the quick action triple valve in 1887. It automatically vents air from the brake pipe locally on each car, which applies the brakes more quickly.  During competitive trials in 1887 - 1888, the Westinghouse design proved so superior that it was made the universal standard.  The air brake was perhaps the most important single railroad invention of the period. 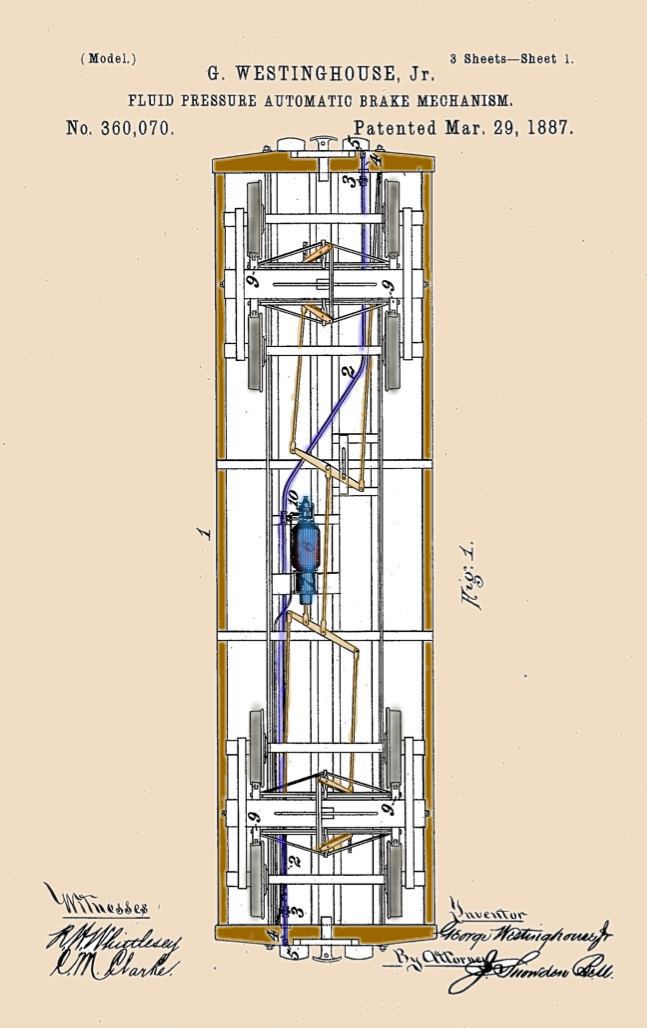