Inaugurating the first international aerial passenger service out of Buffalo, a giant amphibian air liner of the Colonial Western Airways, will take off from Buffalo Harbor this morning to wing its way to Toronto---another link in the city's chain of air lane contacts. At 9:50 o'clock the big twin motored carrier will glide down the ramp from the new terminal at the foot of Georgia St. with a full load of private passengers and newspapermen...  The take off will be witnessed by prominent city officials and others. Traveling to Niagara Falls, the big ship will circle the cataract before continuing to Lewiston, from where it will fly across Lake Ontario to Toronto Harbor, the trip taking 45 minutes.
The service will be a regular travel route with a morning and afternoon trip daily. the schedule is designed to make connections with the important trains out of Buffalo as well as Toronto. The ships that will be in permanent service over the run are two Sikorsky amphibians, which have been Christened Neekah and Nonokas. Ten passenger carriers, they are ultimate in luxurious appointment and safety and capable of being brought down with equal ease on land or water... 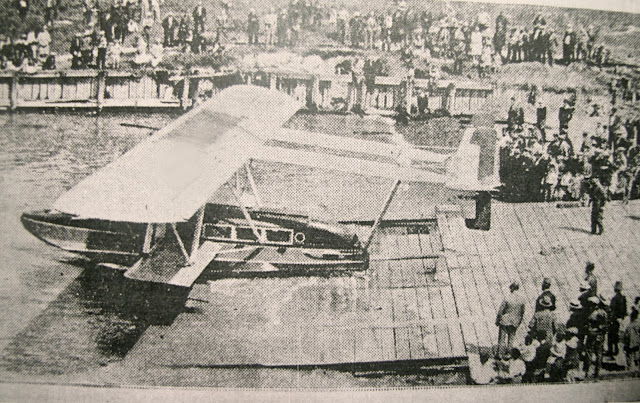 Courier-Express  June 30 1929
by ANNE MURRAY McILHENNEY
With a deafening roar and an angry churning of the waters, the Hummingbird, known in the Indian dialect of Tamigani as Nonokas, skimmed over the Niagara River yesterday morning as the clock pointed to 11:05 and took off on the maiden voyage of the passenger air line route of Colonial Western Airways, between Buffalo and Toronto.  Just 45 minutes later the giant Sikorsky amphibian, after an exciting and momentous trip filled chock full of scenic wonders, pointed it's nose down over beautiful Toronto Island, whizzed by the spar of a sailing boat, and taxied up to the Toronto Harbor Dock.....

In both cities the start of the passenger airline service was an event.  In Buffalo crowds hailed the start of the initial cruise, lining the temporary ramp at the foot of Georgia St. at an early hour and waiting an watching with interest as workers tugged to get the great airfish floated.  Passengers for the first flight arrived at the Buffalo starting place promptly at 9:30 o'clock, and nearly 500 persons attended the start.

FORMER SENATORS WIFE CHRISTENS CRAFT ON NEW
INTERNATIONAL POSTAL ROUTE
---------------------
When the Sikorsky amphibian, Neekah, rolled up the landing ramp at the foot of Georgia St. Wednesday evening at 7:15 o'clock, she carried 600 lbs of mail matter from Toronto---the first international shipment over the Buffalo-Toronto route of the Colonial Western Airways.....The mail was specially stamped and more than 2000 flight covers were received at the Buffalo Post office commemorating the inauguration of the new line, according to government officials......

EDITORS NOTE:  Wandering around Lasalle Park did you ever notice that concrete ramp going into the water at the south end of the park, between the park and where the high rise condos begin? Most people assumed it to be a boat launch.   In reality, it was Buffalo's first International Airport!