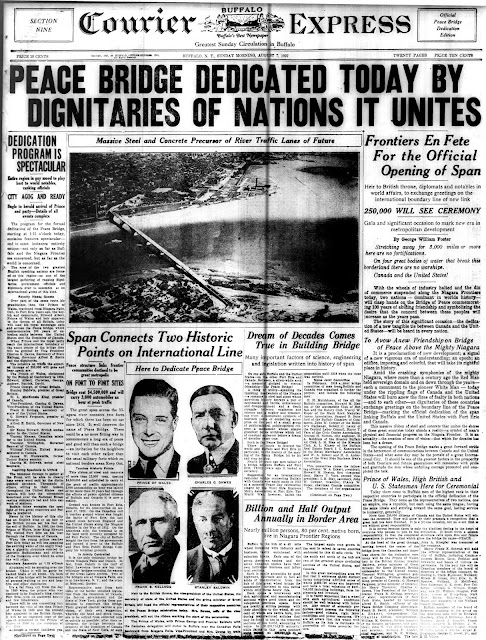 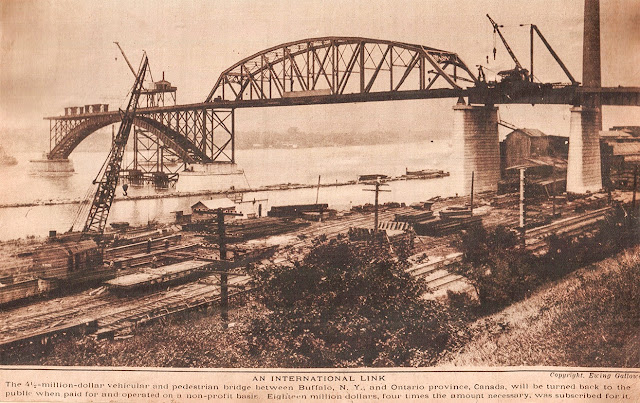 A great ceremony will be broad-cast today in honor of the peaceful relations of the United States and Great Britain, radio again proving its value to thousands who would be in spirit at the International Peace Bridge at Niagara Falls. Another international figure, the Prince of Wales, will be the main speaker today. Twenty-four stations have agreed, thus far, to broadcast the ceremonies in this country, starting at 3 P. M., Daylight Saving Time. WJZ and a great network will carry the voices and the music to the radio audience.
In addition to the Prince's speech, addresses will be made by Stanley Baldwin, Premier of Great Britain; Mackenzie King, Prime Minister of Canada; Howard Ferguson, Prime Minister of Ontario; Lieut. Gov. Ross of Ontario, Vice President Charles G. Dawes, Secretary of State Frank B. Kellogg and Governor Alfred E. Smith. Music will be furnished by three military bands and a chorus of 200 voices, Graham McNamee and Milton J. Cross, announcers of the National Broadcasting Company, will introduce the speakers and describe the scenes and ceremonies before a microphone which will be connected by land wire to WJZ's transmitter.
Transmitting simultaneously with WJZ, New York, will be WRC, Washington, D. C.; WEEI and WBZA, Boston; WBZ, Springfield, Mass., WJAR, Providence; WTAG, Worcester; WTIC, Hartford; WGR, Buffalo; WFI, Philadelphia; WCAE, Pittsburgh; WTAM, Cleveland; WWJ, Detroit; WGN and WMAQ, Chicago; KSD, t. Louis; WCCO, St. Paul; WDAF, Kansas City; WGY, Schenectady; WHAS, Louisville; WMC, Memphis; WSM, Nashville; WSB, Atlanta, and WHAM, Rochester. The event will be broadcast in Canada by CFRB and CKNC of Toronto, and other stations. (Ed. This was the first "round the world" radio broadcast ever attempted. It was heard as far away as Australia)

"What has been said of the relations or the English speaking peoples and what I am to say is but the verbal acknowledgement of  a common feeling, shared equally and alike by the Englishmen, Canadians and Americans who are gathered here. We speak the same language, we cherish the same ideals of citizenship, we hold a common principal in government,  of individual liberty under the law.
"The foundation of this great peace structure which we dedicate today rests  upon the firm bedrock of the Niagara, and the peace of  the English speaking peoples is as firmly based upon common instincts and ideals. The instinct of self-preservation—The most deep-seated of mankind—binds us together, and in that unbroken tie is that ultimate guarantee of the safety and progress of Western civilization. That bond will never break." (C. Dawes)


To Seek Peace and Insure It, is First & Highest Duty—Prince
sees in bridge symbol of maintenance of friendly contacts
between Canada and U. S.

The address of the, Prince of Wales at the Peace bridge was brief but fitting. The Prince of Wales said:
"It gives me great pleasure to be present on the occasion of the formal dedication of this bridge which commemorates the peace which has happily endured between the British Empire and the United States for more than a century.
"May this bridge be not only a physical and material link between Canada and the United States", but may it also be symbolical of the maintenance of their friendly contacts by those who live on both sides of this frontier; may it serve also as continual reminder to those who will use it, and to all at us, that to seek peace and insure it is the first and highest duty both of this generation and of those which are yet to come."
The Prince was accorded an enthusiastic applause both when he arose to speak and when he concluded.

Please note: photos and illustrations (except newspaper pages) are all part of The Buffalo History Gazette Collection/Jerry M. Malloy.  Re-use without my permission is strictly prohibited.  Jerry M. Malloy

Following Movie of the Peace Bridge dedication
is from Youtube
Film is shot on 16mm by Joseph A. Albrecht Sr.Music is Jelly Roll Morton - Victor Recordings