The Fitch Crèche of Buffalo

The Fitch Crèche, nationally recognized as the first day care center for the children of working women in the United States, one which would serve as a model to be emulated by other American cities.  It was the first to implement a Froebel Kindergarten in the U.S.
Maria M. Love was a prominent Buffalonian and social services pioneer. In 1881, she established the Fitch Crèche, at 159 Swan Street in Buffalo, near the corner of Michigan Avenue. Ms. Love founded the Fitch Crèche, after a trip to France where she became aware of the plight of children of working mothers.  The building was a dry goods store that was owned by Benjamin Fitch, a native Buffalonian who donated this building for use by the Crèche which formally opened January 6, 1881. By 1881, Mr. Fitch was a wealthy New York City philanthropist.
The Fitch Crèche, was formed under the auspices of the Charity Organization Society of Buffalo, the first organization of its type in the United States. Buffalo adopted the London method of organized charities in 1877. The first charity organization societies were created to re-organize the public and private charities that had proliferated during the depression of the 1870s. Many charity leaders were disturbed by what they saw as an inefficient and chaotic array of urban philanthropy. The charity organization movement broke from earlier traditions by avoiding the dispensation of direct relief. 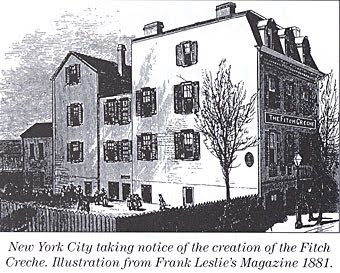 Harpers New Monthly 1885 - "Think of having to take care of 20,000 babies! This is what the Fitch Crèche has done since 1879. This public cradle is the most interesting charity in Buffalo, because the most unique. Founded on the model of the London Day Nursery to care for little children whose mothers earn their support as char-women, it has so far outstripped it's progenitor as to be called the model crèche of the world."  The following descriptions of the Fitch Crèche, are excerpts taken from the "Proceedings of Charities and Correction at the thirteenth annual session held in St. Paul, Minn." July 15-22, 1886, written by Nathaniel S. Rosenau.
When we realize the truth of Victor Hugo's words, "All the vagabondage of the world begins in neglected childhood" we will also realize that the beginning of work for the actual prevention of pauperism lies among the children.  To Build up in them ideas of order, of cleanliness, and of thrift; to save them from the neglect of squalid homes; to keep them from the highways and the gutters; and above all, to remove from their lives the taint of beggary, the disgrace of municipal relief, which in the light of modern experience, is a moral disease, more contagious than any known to medicine,---is to build a future generation, self-reliant, cleanly, and thrifty, which will not require alms, which will not need Charity Organization Societies, which will travel the road paved for it in it's younger days,--the road to independent citizenship.   To these ends, the crèche  and the labor bureau are all important factors. We, in Buffalo, are satisfied that no other charities have helped so far toward their consummation. 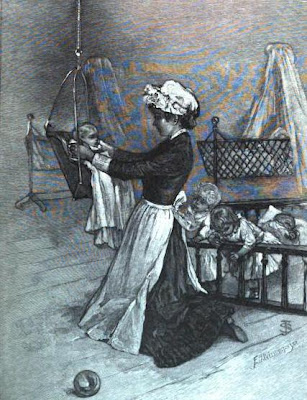 "We charge a daily fee of 5 cents for each child, which the matron is permitted to remit when she thinks circumstances warrant. The fees collected during 1885 amounted to $296.60.  This fee is asked for two reasons: first to eliminate, so far as possible, any idea that permission to leave a child at the crèche is a charity; second as a preventative measure to keep a mother from bringing her child unless she has work for the day.      The Fitch Crèche is a building of four stories. In the basement are the matron's office, kitchen,— connected by a dumb waiter with the floors above,— laundry, reception-room for children, a small dining-room for the help, closets, and store-rooms. The entire second floor is devoted to the children. On it are a large schoolroom, a play-room, dormitory, bath-room, wardrobe, dining-room, closet, and water-closets. The third floor constitutes the infants' department, and consists of a nursery, dormitory, bath-room, closet, and water-closets. The fourth floor is given up to the infirmary and sleeping-rooms for the help.
The dormitories are furnished with iron cribs, each provided with a hair mattress, a feather pillow, a rubber sheet, two cotton sheets, a blanket, and a counterpane. The nursery has swinging iron cradles on fixed standards, which are provided with muslin curtains in addition to the bedding of the cribs. The nursery is also provided with a pound, a portion of the floor about five by six feet, enclosed by a stout wooden railing and carpeted with a soft quilt, in which the infants are placed when awake, to roll about as much as they please, secure from harm.
A price of fifteen dollars was placed on each crib and cradle; and many were taken by individual ladies and small clubs, who then furnished them. Each is named after some flower, whose representation hangs on the wall above it; and many sets of bedding are embroidered with the names or representations of the designating blossoms.  Each bath-room contains three small stationary bath-tubs, with hot and cold water faucets. A row of numbered hooks extends around the room, one belonging to each child, on each of which hang a towel, comb, and wash-rag or sponge, which are used only for the child to whom the hook belongs.
The ventilated closets are connected with an air-shaft, through which a current of fresh air passes continually, thoroughly airing anything that may be hanging in them.  The infirmary is a cheerful room, in an isolated position, which is always ready for a child which may become ill suddenly, and whom it will not be safe to move. But thus far, fortunately, we have not been called upon to use it. The crèche is ready for the child at seven o'clock in the morning. The little one is brought into the reception room where it is taken from the mother by a kind nurse. It goes to the bath-room, where it's clothing is entirely removed and hung in a ventilated closet.  A bath follows, after which the uniform of the creche is donned; and the child finds it's way to the play-room, where there are plenty of toys for it's amusement. Breakfast is ready at 8 o'clock; and play follows until nine, when the cheerful good morning of the kindergartner calls the little one to to more serious yet very pleasant occupations.  At 11 o'clock dinner is served, and then the kindergarten again until one.  Then there is a romp in the open air, if the weather permits, and a nap, if the little head be tired.  At four o'clock, after face and hands have been washed, supper is eaten, when the little one is dressed to  wait the coming of mother, brother, or sister, to take it to it's home.
We take particular pride in the fact that, owing to scrupulous medical examinations and the great care in handling the children, though our total number of admissions now exceeds thirty thousand, we have not had a single serious epidemic of zymotic disease. The results obtained from the creche, aside from the greatest of all, ---making mothers independent of alms,---are many.
Cleanliness, insisted upon from the beginning, soon becomes second nature to the child, and from the child is not long spreading to the home. Good, wholesome food, and plenty of  it, has many times redeemed from ill health and apparent early death some little child, puny and weak from insufficient nourishment. Association with many children has cured morbid dispositions; and care on the part of the nurses has created good manners, orderly natures, and self-reliance, and supressed quarrelsome dispositions.  These results are apparent in a most cursory examination of the children, and they demonstrate, beyond question, the usefulness of what frequently is called " the best charity in Buffalo".  To this proud position, it has strong claims; for not only is it an important factor in suppressing pauperism, but  also preventing an appearance in future generations.
The Labor Bureau:  But,  if we provide a place for the children, it is extremely necessary that the mothers, unable to find work for themselves, should be provided with employment that will enable them to earn a livelihood.  For this purpose we established our labor bureau.  Applications for washer women, house-cleaners and laundresses, are received at our offices of the society and the creche by mail, telephone or in person, and are supplied by the employees in charge with women according to their needs.  So far as the women are concerned this plan worked well.

Editors Note:  Buffalo over the years, always clamoring for tourism and attractions, has been notorious for allowing destruction of historic structures and thus eliminating tourism dollars in the process.  Even beyond dollars, just the pride in presenting our beautiful history and architecture to those outside our local area who come here for conventions, showing them that we have respect for our heritage. The Fitch Crèche was the first day care center for the children of working women in the United States and the second in the World! It would have been incredible to be able to recreate the Fitch Crèche, a museum not only to that, but Maria M. Love and "The Charity Organization Society" of Buffalo, also the first in America! Also a place to raise money for the Maria M. Love Convalescent Fund. It was demolished to expand a parking lot by a few spaces! Thank You demolitionists of Buffalo, you scored another hit. Tourists, you can park here, and tour our beautiful historic parking lots.

: The Life and Legacy of a Social Work Pioneer
Posted by Jerry M Malloy at 2:07 AM

My mother graduated as a Fitch Creche nurse June, 1927.

That's wonderful. You should be very proud of her. This has always been one of my favorite stories that I've researched. Would you possibly have any photographs, stories etc. relating to the Creche? Would be happy to add them to the Fitch Creche story. It was such a shame to see that building go. Would like to keep it's history alive for the generations of children and mothers that benefitted from the services of the Creche. Thank you.

Jerry, this is a very interesting story. I may have to work this into my novel!